Philippine President Rodrigo Duterte speaks during the Philippine Economic Forum hosted by the Japan External Trade Organization in Tokyo on Oct. 26, 2016. Duterte said he wanted all foreign troops out of the Philippines in two years as he continued his tirades against the U.S. during his three-day visit in Japan, a key American ally
Tomohiro Ohsumi—Bloomberg/Getty Images
By Charlie Campbell / Beijing

Now is the era of knee-jerk populism: Asia has brash Philippine President Rodrigo Duterte; the U.S. has Donald Trump; even once quiet Europe had Brexit.

Trump has harnessed fears of immigration and American jobs being shipped abroad with quixotic plans to build a wall at the Mexican border (paid for by Mexico) and force allies to pay for American defense assistance. Duterte has been hailed as a two-fisted hero for vowing to purge the Philippines of drugs and crime within six months, even while death squads gun down more than 3,600 suspected addicts and dealers in the street.

Of course, Duterte and Trump are very different characters with different backgrounds. One is a three-decade serving city prosecutor and mayor; the other’s a billionaire property magnate who’s never held public office. But there are clear parallels in their politics: both are authoritarian-leaning populists who don’t let their inexperience in world affairs prevent that from speaking entirely from the gut — whatever the consequences. And so, when it comes to foreign policy, looking at Duterte’s actions in his first few months in office may give the clearest indication of what a Trump presidency might look like.

“Trump and Duterte are similar in their vulgarity, misogyny and in-your-face politics,” says Bridget Welsh, an international-relations expert at National Taiwan University. “They also capitalize on similar sentiment — shake the system up, challenge the status quo and basically move beyond the norms of rule of law.”

There are differences — especially on China. Duterte seems convinced that his country’s future depends on Beijing, beseeching Chinese President Xi Jinping to build the Philippines a railway, “If you can find it in your heart,” and fawning that, “only China can help us.” Trump may have expressed admiration for China — saying they are “much smarter than we are” — but he has also vowed to aggressively challenge the Asian superpower, which he considers an existential threat to the U.S. economy.

But the two leaders really find common ground in their willingness to tear up the rule book and reshape relationships with long-standing allies. The U.S. has a decades-old military alliance with the Philippines and is viewed positively by a vast majority of Filipinos, yet Duterte has called Barack Obama a “son of a whore” over criticism of his war on drugs. Trump said Angela Merkel is “ruining Germany” about her stance to refugees, and has suggested that he might only support NATO allies in an attack if they have paid their bills to the military alliance. They also have a tendency to react sharply to perceived criticism. Duterte threatened to withdraw his country from the U.N. after it urged him to scale back his drug war. And Trump, as Hillary Clinton illustrated in the three presidential debates, has a famously thin skin.

Read More: Here’s Why Rodrigo Duterte Could Be Making a High-Profile Visit to China

Both Trump’s and Duterte’s foreign policy freelancing has at times been swiftly countered by senior members of their own staffs. Duterte’s move to split with the U.S. in favor of a closer relationship to with China has been denied by his Foreign and Defense Ministers, and openly criticized by former Philippine President Fidel Ramos, a key Duterte mentor — and his own recently appointed special envoy to Beijing. “Are we throwing away decades of military partnership, tactical proficiency, compatible weaponry, predictable logistics and soldier-to-soldier camaraderie, just like that?” asked Ramos in a recent editorial.

Trump has split over foreign policy with his running mate, Governor Mike Pence, who had said that the U.S. should establish safe zones in Syria and meet Russian “provocations” with military force if necessary. “He and I haven’t spoken, and he and I disagree,” Trump said in the second presidential debate.

Duterte’s foreign policy priorities are narrower — largely consisting of extracting the maximum concessions out of rival sponsors China and the U.S., while maintaining blossoming ties with second-tier nations like Japan. As U.S. President, Trump would have a far wider array of concerns on the global stage — and with it, far greater responsibilities. Trump has already seen a revolving door of advisers during his campaign, and that door may well spin faster should he actually reach the Oval Office. “I expect there would be mass resignations from the State Department, from government if there’s a Trump presidency,” says Welsh. “He doesn’t have a foreign policy and he doesn’t have a foreign policy community with him. I think America would face a very significant crisis.”

Ultimately, the biggest similarity between Duterte and Trump is their shoot-from-the-hip communication styles. Each seems to say whatever comes into his minds in the moment, and has no problem contradicting himself in the next. That’s been a big enough problem for Duterte, who has managed to leave China, Japan and the U.S. confused about where exactly he stands after his recent East Asian tour. But every word the President of the United States says — especially on military or foreign affairs — has global significance, and should be weighed accordingly. Confusion has consequences. 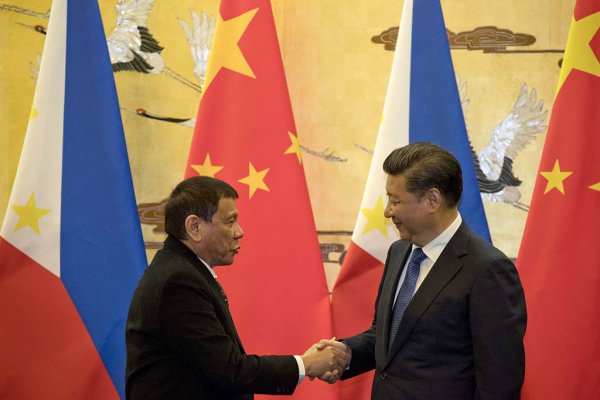 How Philippine President Rodrigo Duterte Is Shaking Up the South China Sea
Next Up: Editor's Pick