Rurik George Caton Jutting, a British banker charged with two counts of murder after police found the bodies of two women in his apartment, sitting in the back row of a prison bus as he arrives at the Eastern Law Courts in Hong Kong on Nov. 24, 2014
Bobby Yip—Reuters
By Aidyn Fitzpatrick / Hong Kong

The prosecution rested its case Thursday in the trial of Rurik Jutting — the British banker charged with the murder of two Indonesian women at his Hong Kong apartment two years ago.

In Hong Kong’s High Court, before a packed public gallery — and an apparently emotionless Jutting — prosecutors played videos of the 31-year-old describing to police officers the manner in which he killed 23-year-old single mother Sumarti Ningsih, from Cilacap in southern Java, and 28-year-old domestic worker Seneng Mujiasih, of Indonesia’s Sulawesi province.

Jutting has pleaded not guilty to the murder of the two women, whose bodies were found on Nov. 1, 2014 after he summoned police to his address. He has admitted to manslaughter on the grounds of diminished responsibility — a plea rejected by prosecutors.

Sumarti’s decomposing body was discovered stuffed into a suitcase on the balcony of Jutting’s apartment. The body of Seneng was found naked on the floor. Both women had been killed with a knife.

In interrogations with police, Jutting described torturing Sumarti for three days. “She was screaming very loud, not in English … I just assumed people would’ve heard,” he said, before identifying the knife he used to kill her. He admitted making videos and taking photos of the torture (“All of the photos from my mobile phone, I took”) but said, “I don’t think I recorded her actual death.”

Jutting claimed to have been buying and consuming large quantities of cocaine in the weeks leading up to the murders. Police found a total of 26 empty small plastic bags in Jutting’s apartment that had each contained a gram of the drug.

Barrister Tim Owen, left, and solicitor Michael Vidler, center, defending former British banker Rurik Jutting (not seen), 31, who is accused of the murders of two Indonesian women, leave the High Court during a break for lunch in Hong Kong on Oct. 24, 2016, on the first day of what is the city's biggest murder case for years
Anthony Wallace—AFP/Getty Images

The defendant described being in a paranoid state of mind during the days in which he held Sumarti captive, believing that police were about to storm his apartment. He said he barricaded the door with boxes “to give me time to jump if I needed to” and spoke of police coming through “windows” and “sewers.”

The prosecution then showed the judge and the jury various exhibits, including the weapon used to kill Seneng — a blood-stained knife — and graphic photos of Sumarti taken before and after her death. Among them was an image of Sumarti’s corpse with her head held up to face the lens.

The defense said that Jutting would not testify, and added that, because the prosecution had rested it case earlier than it expected, its expert witnesses — a doctor and a psychologist — would not be able to testify until Monday, when the trial resumes.

Deputy High Court Judge Justice Michael Stuart-Moore expressed the hope that jurors could “come back fresh with an open mind” after the weekend. 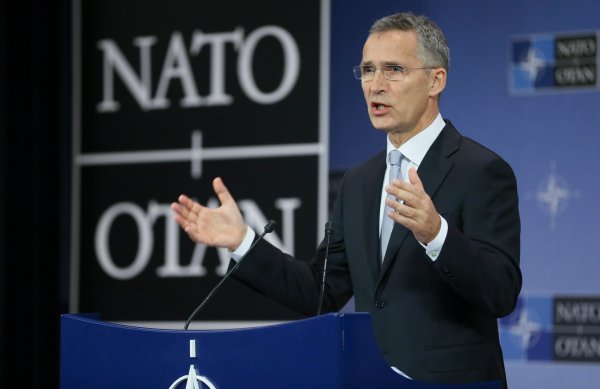 U.S. and Britain Pledge to Deploy Forces to Eastern Europe
Next Up: Editor's Pick