Australian Cardinal George Pell poses at his office in the San Giovanni Tower at the Vatican on Oct.16, 2014.
Eric Vandeville—Sipa USA, via AP
By TIME Staff

Police from the state of Victoria, Australia, have flown to Rome to interview Vatican treasurer Cardinal George Pell over allegations of sexual assault.

A spokeswoman for Pell confirmed Wednesday that the Australian-born Cardinal had been interviewed and would continue to co-operate with police but said that he “repeats his previous rejection of all and every allegation of sexual abuse,” the Guardian reports.

Victorian police had previously confirmed that they were considering charging Pell in July, when allegations that the Cardinal had abused young boys in the 1970’s and 1980’s surfaced in Australian media.

Among the allegations were those made by two men who claimed on Australia’s ABC News that, when they were high school students, Pell had repeatedly touched their genitals while swimming with them at a pool in Ballarat, Victoria. Pell was episcopal vicar for education at the time.

“It’s about time Australia’s most senior Catholic was interviewed by the police,” Leonie Sheedy, the chief executive officer of Care Leavers Australia Network, a support group for people who were raised in orphanages, told the Guardian.

Pell has described the allegations as “utterly false” and “nothing more than a scandalous smear campaign.”

Earlier in 2016 Pell testified from Rome via video link to an Australian inquiry into child sex abuse, where he said the Catholic Church had made “enormous mistakes” in dealing with claims of sexual abuse. 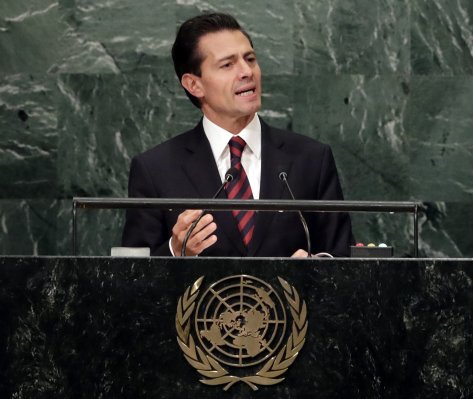 Mexico's President Says He Isn't Out to 'Screw' His Country
Next Up: Editor's Pick