What My Immigrant Family Taught Me About America

My maternal grandparents, aunts, uncles and cousins used to be undocumented immigrants. But like millions of others who have come to the U.S., they certainly aren’t criminals or “bad hombres,” as the Republican nominee for President, Donald Trump, made immigrants out to be in the final presidential debate.

My relatives were teachers, nurses, specialists in agronomy and students in El Salvador, and their decision to leave was not easy. It was the early 1980s and the U.S.-funded Salvadoran military was at war with the leftist movement. When rumors spread that one of my uncles was seen at a meeting planning a protest, neighbors warned that he was at risk of being killed.

Growing up in New York, when my parents received letters or calls from family and friends who were still living in El Salvador, I listened as they lamented over the murder of someone they knew. I listened to the graphic details of what this war doled out: dead bodies on the streets, imprisonment and torture, “disappeared” people, body parts hung on corner posts to warn others of the cost of rebelling against the government and rapes meant to warn of the same.

Like many others now facing similar conditions—destruction, violence and looming economic decline—my relatives decided to leave and seek refuge in another country. Upon arrival to the U.S., my family members struggled and worked hard to create a life in this country.

I remember how hard my aunts and uncles worked. When I was 13, I joined a few of them at a sweater factory job. We started early in the morning, and the factory was hot and humid, lacked air conditioning and was clouded with yarn dust. These conditions were also unsafe. I despised that job. While I only worked there during my summer breaks, I was saddened that my family members had to endure those conditions for years. But they persisted.

Along with my parents, they worked in knitting factories, paper mills, kitchens, hospitals and schools. They paid taxes. They pooled their money together and bought cars and, eventually, their homes. They sent their kids to public schools. And they learned English—learning from me in basement classes at my home and in local schools and organizations.

I remember as a teen translating and typing legal documents, as well as letters related to immigration-related applications, jobs and schools. As it has been for so many other children of immigrants, this was a labor of love.

Despite horrid labor conditions, below-poverty wages, a high cost of living and the constant risk of deportation, my relatives, like so many others, became part of the economic and social fabric of the towns into which they settled. A federal policy change in 1986 gave them the opportunity to regularize their status and, eventually, become U.S. citizens.

Their stories are shared by millions of immigrants who work hard to create a new life in America. It takes a great deal of courage to endure challenges in a place that labels you a criminal while simultaneously benefitting from your labor.

Like Karla Ortiz, the brave 11-year old who spoke on the first night of the Democratic National Convention, because of my family, I grew up knowing what immigration policy is about. I learned how difficult it is for immigrants to constantly navigate immigration policy, policy changes, labor abuses, racism,and xenophobia.

I am scared for immigrants today. I’m also angry about the false narrative that currently circulates about undocumented immigrants. Messages like those delivered by Trump and others work to cruelly incite xenophobia and to prevent people from understanding the truth about immigrants and what they mean for the U.S. It is the kind of false narrative that allows politicians to deny us comprehensive immigration reform. It is the kind of gross misinterpretation that inhibits states and private schools from adopting policies that give undocumented students equal access to higher education.

We need more than just the 13 states that currently allow undocumented students to pay in-state tuition and receive financial aid to do so. And we need more schools to follow the lead of Freedom University and private institutions like the University of Chicago and Northwestern University to provide these students with real access to a college education. They are inherently part of this country’s future social, political and economic growth.

I am in awe of my immigrant family for their immense strength and courage. These family members and their children are now nurses, doctors, bus drivers, computer technicians, factory workers, police officers, social workers and educators. They own homes, pay taxes, serve their neighbors, and critique and challenge this country to live up to its ideals.

I have learned countless lessons from listening to my family. They inform my work today. As we head toward the 2016 elections, it is imperative that we listen to immigrants’ stories to understand what’s at stake. 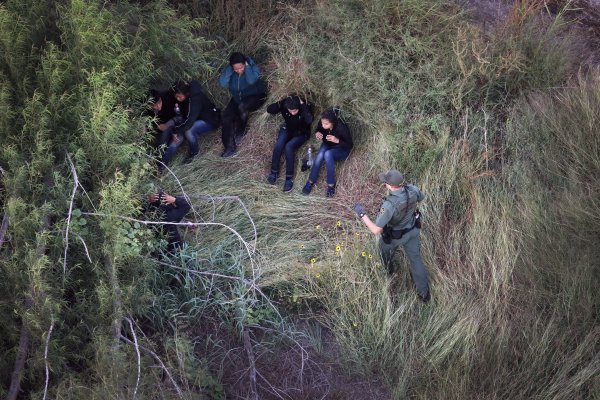 One Photographer Traveled the Full Length of the U.S. Border With Mexico
Next Up: Editor's Pick