LGBT Group's Ad Asks How Anyone Can Support Donald Trump

The nation’s largest LGBT rights group on Tuesday began running stinging ads that ask voters who know a gay person how they can possibly vote for Donald Trump.

The digital ads, produced by the Human Rights Campaign and featuring a mother who lost her son in the June massacre at a gay dance club in Orlando, are part of the ongoing campaign to elect Democratic nominee Hillary Clinton to the White House. The group has invested heavily to mobilize at least 10 million LGBT voters, and its digital efforts are targeting specific voters.

“If you love a gay person, if you know someone who is gay and you truly, really love them, I don’t know how you could justify a vote for Donald Trump,” says Christine Leinonen, whose son Christopher “Drew” Leinonen was among the 49 victims killed at Pulse nightclub. Leinonen also spoke at the Democratic National Convention.

The emotional appeal comes as Clinton appears to be pulling ahead of Trump in public polling and is flexing her campaign’s political muscle to turn out supporters to cast ballots early. Trump’s allies, however, are hardly conceding, and Trump himself has suggested he may cast doubt on a loss.

Despite the advantages, Democrats are not letting up. Clinton and her allies have now spent almost $270 million on broadcast ads through this campaign, while Trump and his team are approaching $55. Last week alone, Clinton spent almost $7 million on ads in Florida, while Trump spent half that.

In the wake of the Pulse shooting, the Human Rights Campaign’s leadership expanded its focus to include advocacy for restrictions on gun right rights. It left many observers puzzled, but it has been a powerful organizing tool for the group’s efforts in the states.

“We have a responsibility to not only find commonsense solutions to gun violence, but to ensure we continue moving forward as a nation towards full equality for LGBTQ people,” Human Rights Campaign chief Chad Griffin said. “While Donald Trump threatens to drag us backwards, time and again Hillary Clinton has demonstrated through her words and actions that she has the vision and leadership to unite us and move this country forward.” 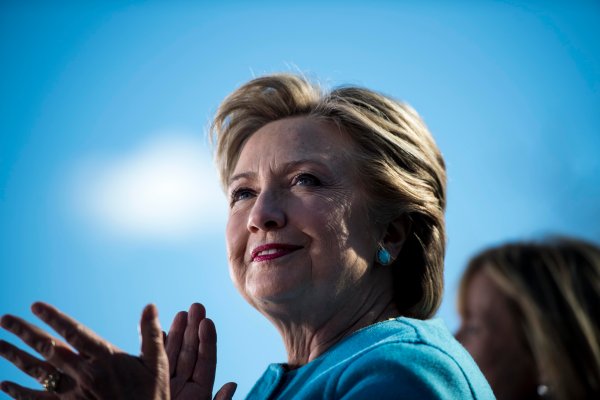 Watch a Crowd Sing 'Happy Birthday' to Hillary Clinton One Day Early
Next Up: Editor's Pick