James Franco continues to blaze an eccentric art career across mediums with his latest work: a mesmerizingly weird performance art video, produced in partnership with auction house Sotheby’s. Entitled “James Franco Reimagines the Della Robbia,” it’s a minimalist, four-minute video of a number of different people (none of them Franco) being doused in a gooey, dripping clear gloss. The camera lovingly slow-mo zooms in on each of Franco’s models, turning their distorted features into a kind of disturbing abstract art.

The inspiration behind the video is Luca Della Robbia, a 15th century Italian artist whose studio was known for intricate, large-scale glazed terracotta works painted in bright colors. Considered one of the greats of the era, Sotheby’s has just launched an exhibition of the unusual style. The secret behind making the distinctive glossy terracotta works remains mysterious, as the New York Times once noted.

So as part of Sotheby’s Artist Response Series, Franco crafted this contemporary take on the “glazed” concept… heavy on the “glazed” part. The models appear immobile as wax mannequins, glistening in their gloppy coatings as clear liquid drips on and from them.

“To mimic and modernize these sculptures [of Della Robbia], I wanted to create living icons emphasizing the glazing process,” he said in a release of his approach to the project. It appears that emphasis a success. 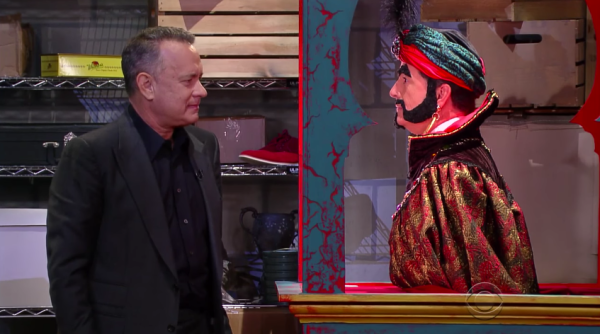 Watch Tom Hanks Ask a 'Big' Favor of Zoltar Once More
Next Up: Editor's Pick