The Heathrow Decision Is Supposed to Show Britain Is Open for Business. It Says the Opposite

A plane approaches landing over the rooftops of nearby houses at Heathrow Airport in London, on Oct. 25, 2016.
Frank Augstein—AP
Ideas
By Dan Stewart

It was a decision over 50 years in the making. The British government today gave its approval to the expansion of Heathrow Airport, one of the world’s largest and long one of its most congested by air traffic. The construction of a third runway at the airport on London’s western flank is forecast to cost £18 billion ($22 billion), but analysts say it could give the British economy a £147 billion boost.

The main alternative plan under the government’s consideration had been to expand Gatwick Airport, a far smaller facility in London’s southwest, and one much further from the city’s center than Heathrow. That cheaper and less ambitious proposal would have mainly benefited the European tourists who currently fly into Gatwick, and not the airlines and other businesses who have been pleading with the government to expand the country’s main air hub for a generation. Heathrow airport’s runways currently operate at 98% capacity, which restricts air traffic and makes costly delays more likely.

The Transport Department said the government’s approval “underlines its commitment to keeping the U.K. open for business now and in the future and as a hub for tourism and trade.” And on the face of it, this seems like just the message for Britain to be sending to international markets, as the country prepares to leave the European Union: Look how we’re still willing to listen to the business community, and make the big decisions to keep Britain booming. But this decision arrived at its destination after years and years of delays, and faces many more years of debate before the first spade digs into Heathrow’s turf—if it ever does. It may end up sending another kind of message altogether.

The tale of British airport expansion is a sorry saga of briefing papers, aviation studies and political inaction, all bound tightly in red tape. Enthusiasm began to build for a third runway at Heathrow in the 1990s, but new terminals were built or planned instead. The Labour government under Tony Blair argued there was a strong case for a third runway in 2003, and again in 2007. David Cameron’s coalition government set up an Airports Commission in 2012 which recommended last year—again—that a third runway would be the best way to increase capacity. Today, finally, the government cleared it for takeoff.

The saga isn’t over, however. Now begins the daunting process of gaining approval —first, from the U.K. parliament, which will vote on expansion late next year or early 2018. Why the wait? Because many in Westminster, including some in Prime Minister Theresa May’s own cabinet, are against the new runway. Some oppose it on environmental grounds, others on the impact more air traffic will have on local communities in southwest London and surrounding areas. The debate will be long, and fierce.

If the proposal gets through parliament, the airport—owned by a consortium of investors from Spain, Qatar, China and Singapore, among others—must get planning permission from the regional authority and the communities minister, conducting health, environmental, and technical assessments that will hold construction up for at least another two years. Multiple legal challenges are also expected, from local municipalities worried about quality of life to environmental groups concerned about the increase in carbon emissions it will bring. Each will stymie progress at every step of the way. The most optimistic prediction for construction to begin is 2021. Heathrow thinks the runway will be complete by 2025. Most experts think 2030 is more realistic. Some think it may never be built, that the roadblocks in its way are insurmountable.

The approval of Heathrow’s extension risks being not a symbol of Britain’s openness to global investment, but a reminder that the country is frequently hamstrung by turgid, centralized bureaucracy, deficient planning laws that act as a brake on growth, and a thornily complicated legal system that can bind up investors in court for decades.

May could have sent the world a message that Britain was willing to act more quickly and fearlessly — perhaps, by fast-tracking a decision on Heathrow, instead of weighting an already drawn-out process with another year of parliamentary debate before putting it to a vote. The government risks looking docile, just when it needs to appear agile. If Britain is to have a successful Brexit, it must be willing to make tough decisions, not just big ones. 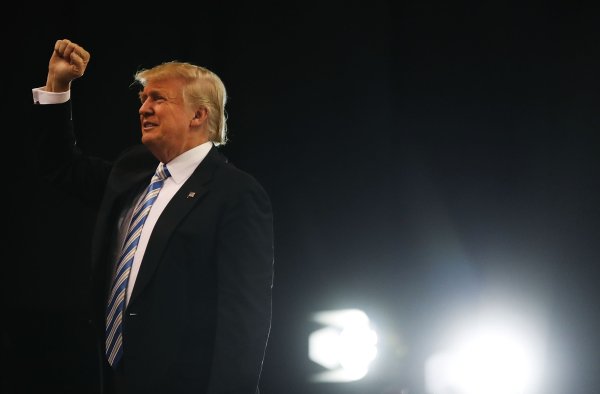 Donald Trump Supporters Are Using a Nazi Word to Attack Journalists
Next Up: Editor's Pick