A Burmese monk looks out from a viewpoint at the Mae La refugee camp in Tak province, Thailand, on June 6, 2012
Paula Bronstein—Getty Images
By Feliz Solomon

Repatriation of refugees from Burma began on Tuesday with the voluntary, assisted return of 68 people who had been living in camps along the Thai-Burma border.

The U.N.’s refugee agency, UNHCR, said the move marked a “milestone” moment in one of the world’s most protracted displacement scenarios, but stressed that this does not mean mass returns are imminent, reports Reuters.

“This particular movement is a milestone,” UNHCR field coordinator Iain Hall told Reuters. “But it won’t be the start of a large exodus.”

For 30 years, Thailand has hosted more than 100,000 refugees from Burma, officially known as Myanmar, as civilians fleeing civil war in the country’s embattled southeast poured across the border. Many of the refugees are from the Karen, Mon and Shan minority ethnic groups.

Read More: Inside the Kachin War Against Burma

Most refugees from Burma live in one of nine officially recognized camps, where they receive material assistance, health and education services from the UNHCR and other aid agencies.

Over the decades, some have been resettled in third countries such as the U.S. and Canada, while others chose to return to Burma on their own. But many refugees had nothing to return to, and some families have children who were born, raised and schooled in the camps, having known no other home.

Hall said the governments of both Burma and Thailand officially endorsed Tuesday’s return, Reuters reports — a scenario that was unimaginable only a few years ago.

Burma has been wracked by civil war for more than six decades, as more than 20 nonstate armed groups have fought for greater autonomy in the country’s rugged borderlands.

The country was ruled by a brutal military regime until democratic reforms began in 2011, and the military still holds considerable political and economic power. A peace process that began under former President Thein Sein is now being overseen by Nobel laureate Aung San Suu Kyi, who became Burma’s de facto leader after a landslide win in elections last year.

Despite a partial ceasefire penned in October 2015, war still rages in several parts of the country, and some armed groups have been excluded from peace talks. 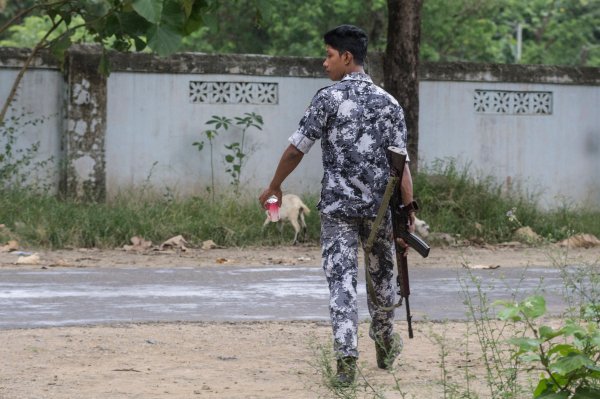 Army Continues to Search for 'Jihadists' in Western Burma
Next Up: Editor's Pick