Along with reading some #MeanTweets, President Obama also chatted about his possible successors Hillary Clinton and Donald Trump on Jimmy Kimmel Live Monday.

“The Secret Service was very thorough this afternoon. I got my office swept and my prostate checked. And guess what? Obamacare covered the whole thing,” the late-night host quipped during his monologue.

During the interview, Obama did not hold back from taking digs at the GOP nominee, even revealing that he has heard and seen Trump’s lewd tape with Billy Bush. “I did [watch], I think we were in Chicago, someone showed me on a phone,” POTUS said.

“When you watch the debate and you watch Donald Trump do you ever actually laugh?” Kimmel inquired. “Most of the time,” Obama nodded.

The Commander in Chief went on to condemn Trump’s remarks during the election season thus far. “What we haven’t seen before is someone questioning the integrity of elections and well of the people,” he described, calling out Trump’s “politics of putting down in explicit terms of Muslims, patriots, [and] describing women on a one to ten score.”

And when asked why people don’t trust Clinton, POTUS explained, “A lot of this just has to do with the fact that she has been in the trenches, in the arena for 30 years, and when you have been in the public eye for that long, and in politics, folks go after you and they’re trying to find a weak spot, and any mistake that you make ends up being magnified.”

Obama also gave, yet another, glowing endorsement for Clinton. “It’s about getting policy right and making sure folks are doing a little bit better,” he noted. “The brand of politics that Hillary represents, which is pragmatic and says that you don’t get everything done at once, you make progress and move pieces at a time, that may not attract as much attention, it’s not something that goes into 140 characters as easily, but I think she will be an outstanding president.”

Later, when Kimmel asked POTUS if he wishes he were the one campaigning against Trump, the president responded, “I think Hillary’s doing just fine. I am enjoying campaigning on her behalf and also campaigning for Senate and House candidates.”

“I now have an iPhone, but it is, you know, like, the phone you give your 2-year-old, where they can pretend to press things, but nothing actually happens? So my phone has no phone, no camera, no music – all it has is the Internet, and I can send e-mails,” he told Kimmel. “But my rule has been throughout my presidency, is that I assume someday, sometime, somebody will read this e-mail, so I don’t send any e-mail… that at some point won’t be on the front page of the newspapers.”

Lastly Obama had a message for the American people. “Michelle and I will still be alive after three months,” he said subtly reminding everyone that he’ll still be around even after the new president is named. 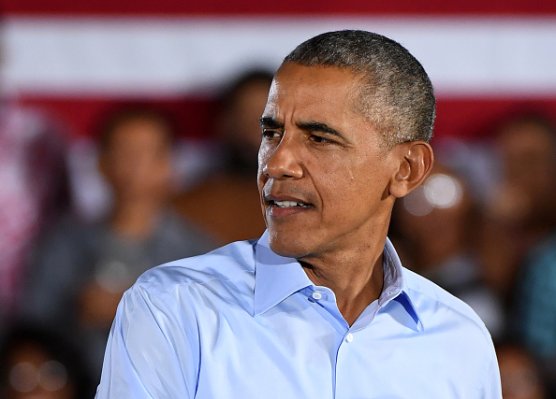