Appearing stoic and drastically thinner than he was when he was first arrested, Rurik Jutting, 31 pleaded not guilty at the High Court to twin charges of murder by reason of “diminished responsibility” but admitted to being guilty of manslaughter — a plea rejected by prosecutors. He also pleaded guilty to the unlawful disposal of a body.

In the early hours of Nov. 1, 2014, Jutting called the police to his luxury apartment tower in Hong Kong’s neon-lit Wan Chai district, where they found the bodies of two women. The first, 28-year-old Seneng Mujiasih, also known as Jesse Lorena, was naked on the floor of the residence, and had reportedly suffered grievous cut wounds to the neck and buttocks; the second, 23-year-old Sumarti Ningsih, had been dead for days, mutilated and stuffed into a suitcase. Scenes of torture had apparently been filmed on Jutting’s iPhone.

Facts presented to the court painted a grim portrait of one of the victims’ final days. Jutting had persuaded Sumarti to come home with him in the early hours of Oct. 25 by offering her a “large sum of money.” She was initially reluctant: he had paid her for sex once before, but on that occasion, he was so violent that she offered to refund half the money he had paid her if he allowed her to leave early. The violence to which he subjected her before finally murdering her was heinous. Over a three-day period, he tortured her with his belt, a pair of pliers, and sex toys; before finally cutting her throat, he forced her to lick his toilet bowl.

When police inspected Jutting’s apartment, they found 26 small plastic bags containing traces of cocaine. In videos he recorded of himself on his iPhone, Jutting celebrated acting out his violent fantasies — inspired, he said, by pornographic videos. He also said he “definitely” could not have killed Ningsih “without cocaine.”

Sumarti, from Cilacap, a southern Javanese town, was a single mother. Seneng was from Indonesia’s Sulawesi province, and, having overstayed her visa, was working illegally in Hong Kong. She took various odd jobs to earn the cash to help her mother buy a house.

In November 2014, there was a larger news story in Hong Kong competing for headline space — the three-month-long pro-democracy demonstrations known interchangeably as Occupy Central or the Umbrella Revolution — but the murders all the same gripped this town and its international press corps in it.

Lurid stories followed of Hong Kong’s overworked, overpaid bankers supposedly self-medicating with a diet of alcohol, cocaine, and purchased sex. The Wan Chai neighborhood — where the sex workers there are predominately migrant workers from all over Southeast Asia and parts of Africa — became internationally infamous for seediness and debauchery.

The truth, of course, is more nuanced. Sex workers crowd the bars of Lockhart Road, but a couple of blocks away are fashionable restaurants and expensive apartment buildings (starting rentals in the building where Jutting lived stood at around $2,800 a month in 2014). Wanchai is just as much about fine wine and ballet classes as it is vodka shots and sex.

Neither is there any suggestion that Seneng and Sumarti were sex workers per se. Both had arrived in Hong Kong as low-paid domestic workers.

Broke, owing money rapacious employment agencies, or simply wishing to earn more money to support impoverished families back home, some migrant workers take on extra jobs, like part-time cleaning or waiting tables. In a comparatively few cases, they sell sex. Sometimes they do all of the above, moving fluidly between the lives of sex worker, migrant worker, part time worker and illegal alien.

Indonesian migrant workers hold up placards during a vigil for slain colleagues Seneng Mujiasih and Sumarti Ningsih on the eve of the murder trial for British banker Rurik Jutting, in Hong Kong's Victoria Park on Oct. 23, 2016
Tengku Bahar—AFP/Getty Images

Jutting himself was a Cambridge-educated banker, but at the time of the murders, he was unemployed: he had reportedly resigned from Bank of America Merrill Lynch’s structured equity finance and trading division days before. The Guardian reported that he had left a chilling automated reply on his work email account: “I am out of the office. Indefinitely. For urgent enquiries, or indeed any enquiries, please contact someone who is not an insane psychopath. For escalation please contact God, though suspect the devil will have custody (Last line only really worked if I had followed through).”

Jutting has spent the past two years in police facilities on the outskirts of Hong Kong. His trial is expected to last 15 days, according to Michael Vidler, the attorney representing him.

The defendant arrived under partly cloudy skies Monday morning at Hong Kong’s High Court. He wore a midnight blue button-down shirt and appeared healthy. (Once a collegiate rower, the man photographed after his arrest two years ago was bloated, ruddy and overweight.)

British banker Rurik Jutting, charged with the grisly murders of two women, smiles as he sits in a prison van leaving the Eastern Court in Hong Kong on Nov. 10, 2014
Philippe Lopez—AFP/Getty Images Former

Outside the court, a group of Indonesian migrant workers had gathered to demand justice.

“The culprit abused the vulnerability [of Seneng and Sumarti] because they have no family in the city, were poor, and desperate for income to support their families back home,” Sringstin, the spokesperson for the advocacy group Network of Indonesian Migrant Workers, said in a statement. “The victims deserve justice regardless of their immigration status and type of job here.”

After Jutting lodged his plea, barristers in the courtroom briefly sparred over the jurisprudence of “diminished responsibility.” Jutting claims that a personality disorder, as well as a struggle with cocaine and alcohol abuse, had impaired his judgment, thus warranting a lesser sentence of manslaughter.

The press corps — a scrum of Hong Kong–based reporters and writers from U.K. tabloids, which seized on the Jutting story two years ago — were then ushered from the courtroom to accommodate the hundreds of Hong Kong residents being considered for jury service.

Five Indonesian women wearing shirts that bore the word “Justice” were also told to leave the courtroom’s public seats. “We don’t have demonstrations in court,” the judge said. 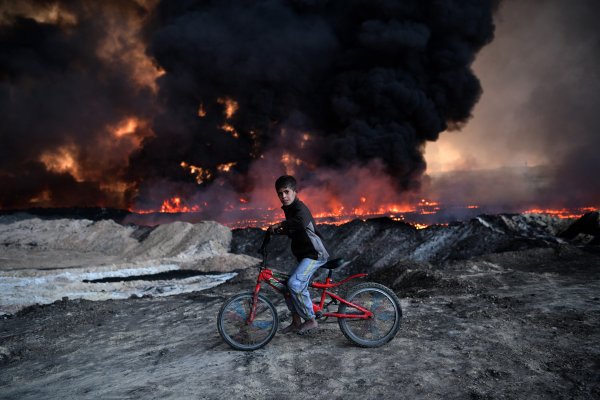 ISIS Sets Oil, Sulfur Fires in Battle for Mosul
Next Up: Editor's Pick