Qurans and Solar Cells — Inside the ISIS Tunnels Around Mosul

The jihadists had prepared to hunker down in the tunnel for a long wait. They stashed canned food, clothes, vegetables, stacks of water jugs. In the underground bunker, they could take shelter from airstrikes, or perhaps even wait out an invasion — and then burst onto the surface, surprising their enemies.

ISIS militants dug, reinforced and outfitted this tunnel in the village of Sheikh Amir, which was retaken by Kurdish forces on Monday, the first day of a major offensive intended to seize the nearby city of Mosul, the largest urban center under the group’s control. A day later, Kurdish troops handed the village to the Iraqi special forces, who are now using part of the hamlet as a staging area for their attack down the main road into Mosul from the east.

The tunnel was one piece of the elaborate military preparations mounted by the jihadists in advance of the current Iraqi military offensive. The underground passageway was one of a number of such tunnels that have been found in areas reclaimed from ISIS. The presence of the tunnels even in tiny villages retaken this week suggests that far more extensive defenses could be in place in Mosul, a city of hundreds of thousands of people, where ISIS awaits an attack.

When they abandoned the town — or were killed in combat — the ISIS members also left behind documents: Qurans and other religious books, newspapers containing updates on battles across the region. There was also a single page of orders that sound like siege preparations. Titled simply “Orders that must be carried out,” and written in Arabic, the document lists 12 separate instructions: stockpile rations for a month, avoid gathering in the open in order to avoid attracting airstrikes. In addition, “Each station must have a solar cell for charging devices.”

Kurdish Peshmerga forces inspect a tunnel inside a building in the Shaqouli village, about 35 kilometers east of Mosul, after they've recaptured it from ISIS on Oct. 18, 2016.
Safin Hamed—AFP/Getty Images

Dated in the Islamic calendar, the document says it was issued in February 2016, signed by “Major General Jaffar al-Tayyar, the Emir.” Some of the general’s instructions are bafflingly mundane. He orders the troops to have a generator and a stockpile of fuel on hand. He reminds them to pray.

The tunnel itself would have taken weeks to prepare, at a minimum. One entrance lies in an open area and had been concealed with a pile of debris. Another entrance opens into a house within the village. Some of the passageways are reinforced with metal frames, and rigged with battery-powered lights. The tunnel is wide enough to contain rooms lined with thick plastic slabs. The abandoned newspaper scraps and clothes suggest the tunnel had been used in the past, likely as an air-raid shelter. There is graffiti written on the walls, including a memorial to a fallen comrade.

Read More: How to Beat ISIS and Save Iraq

Still, it would have been a miserable place to hide. Inside the air is stale, the lack of oxygen palpable.

From the Roman era to the Vietnam War to Gaza, tunnels have been a staple of insurgent warfare for centuries, and they have now emerged as a central component of ISIS tactics. For one thing, they provide protection from the air, which is owned by its enemies. Since 2014 a U.S.-led international military coalition has launched more than 15,800 airstrikes on ISIS targets in Iraq and Syria, forcing the group to move some of its activities indoors and underground.

Now the tunnels add an additional dimension to ISIS defense of Mosul. Wounded Iraqi special forces troops in a field hospital in Sheikh Amir said they had been ambushed by ISIS fighters who emerged from a tunnel on Friday.

The tunnels are just one component of the ISIS defense plan, which includes some exotic variations on asymmetrical warfare. Among the group’s hallmark tactics are suicide car and truck bombers, including attackers inside armored cars. The militants have also planted a deadly field of improvised bombs in the villages from which they withdrew this week. The bombs mean that even when ISIS withdraws, they can prevent both soldiers and civilians from moving freely, adding one more complication to an already hard battle. 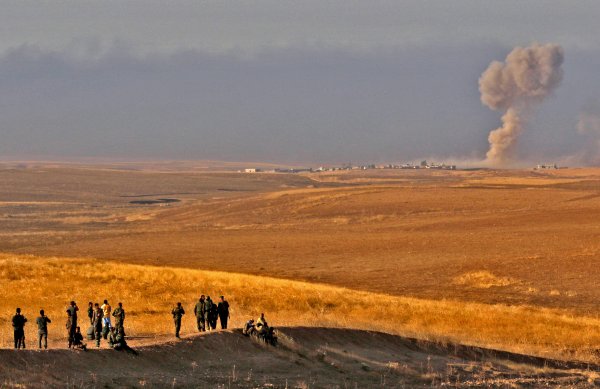