Moonlight Enchants by Revealing Itself In a Thousand Facets

You can’t always read people’s hearts just by looking at their faces. There is surprise, and risk, in getting to know who a person really is. To see this high-stakes gamble played out onscreen, like the opening of a flower captured in stop-motion photography, is one of the greatest gifts filmmakers and actors can give us. Barry Jenkins’ Moonlight is such a calm yet precise piece of filmmaking that you’re barely prepared for its shimmering, quietly sensational ending. Adapted from a short theater piece by playwright Tarell Alvin McCraney, this is a coming-of-age movie, and a love story, that leaves you feeling both stripped bare and restored, slightly better prepared to step out and face the world of people around you, with all the confounding challenges they present. There’s not much more you can ask from a movie.

Three actors play the lead character during the course of Moonlight: a new, marvelous child actor named Alex Hibbert plays Little, an almost incongruously scrawny Miami kid who’s picked on mercilessly by his classmates. With these mini punks in pursuit, he dashes into a decrepit drug hangout. A dealer named Juan (Mahershala Ali, in a lustrous, tender performance) plucks him out: Juan is the kind of guy who looks threatening to bad dudes but is radiantly kind to innocents like Little. It’s as if he senses all that’s both eager and guarded about this kid. Little refuses, at first, to reveal where he lives, but when Juan brings him home for a good meal (Janelle Monáe plays Juan’s smart-sassy girlfriend, Teresa), he scoops the food from plate to mouth almost without taking a breath between bites–it’s casual, unstudied generosity he’s most hungry for, and he finds it at that table.

Juan returns Little to his mother Paula (the always terrific Naomie Harris) the next morning: their small apartment is tidy enough, yet there’s something on the edge about it. Paula isn’t the mother Little, or anyone, needs, and adolescence doesn’t improve their wary, pinched relationship.

As a teenager (now played by Ashton Sanders), Little becomes known by his real name, Chiron, and he carries a powerhouse of spiritual and emotional energy tight in his wiry body. He’s taller and, if possible, even thinner, as if he were stretching toward a manhood he isn’t nearly ready for. He’s also even more watchful and reserved, as if completely bewildered by the worlds both inside him and out. He still has very few friends, though there is one, Kevin (Jharrel Jerome), who shows him a kind of rough-and-tumble kindness that segues into something deeper and more meaningful, a romantic and sexual reverie that neither kid can quite deal with. This isn’t the time nor the place nor the age for it.

The young men around them are judged by how tough they are, and Chiron doesn’t have that kind of fierceness in him: after a few school bullies rough him up and walk off, laughing, he stands like an awkward stork, his hands curling into puny little fists as he watches them go. When he finally summons the nerve to fight back, your heart sinks–but it’s also clear there’s no other way for him to survive.

As an adult (enter Trevante Rhodes), Chiron, who now goes by the name Black, is barely recognizable–he’s beefed up and closed off, the kind of guy who doesn’t let anyone mess with him, or get to him. He now lives in Atlanta, and he and his mother are finally brokering some sort of peace. And one day Kevin (now played by André Holland, of The Knick) calls him out of the blue. What happens between the two men, as played out by these two extraordinary actors, is so subtle and marvelous to watch that you feel drawn into an invisible but intense embrace. Any defenses you might be hanging on to seem to dissolve along with Black’s. The spell this movie casts is that strong.

This is Jenkins’ first feature since his 2008 debut Medicine for Melancholy, a hypnotic, perceptive film about a young man and woman of color slipping into a tentative relationship in that historically pretty-damn-white city, San Francisco. Many who saw the film, including me, have been waiting for a follow-up. Moonlight exceeded my expectations: Jenkins, with his superb eye for detail, can pack a small universe of meaning into just a second or two. When Little comes home from school, his mother nowhere in sight, he runs a bath for himself, adding a generous squirt of dish soap for maximum bubbles. Then he heads to the stove and grasps a pot of hot water–carefully, using a towel to protect his hands–and pours that in too. You don’t need to wonder why.

There are hundreds of small, mighty moments in Moonlight that add up to something as soft and shimmering as the texture of light on ocean waves: the way Black removes his thug-life gold fronts before he tucks into the meal Kevin–now a short-order cook, a kind of professional caretaker–has prepared for him; or the look, a silent rush of sympathy and anguish, that passes between Juan and Teresa after Little asks what the word faggot means. There’s something else: we’ve never seen onscreen depictions of black masculinity like the ones we see here–which blasts open the question of why we keep seeing men of color depicted only in certain ways, over and over again.

You could draw a chart, with arrows crisscrossing every which way, outlining all the issues–of class and race, of sexuality and identity, of having and not having–Moonlight touches on. But its incandescence can’t be diagrammed. If there’s such a thing as diffuse clarity, that’s what Moonlight gives off. 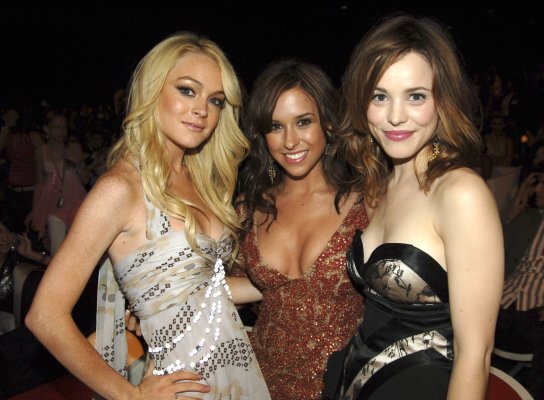 Rachel McAdams Is Down for the 'Mean Girls' Musical
Next Up: Editor's Pick