History, they say, is written by the victors. That has made documenting conflict, stretching from a small New York gallery more than a century ago to that cell phone in your pocket today, as much a part of war as the bullets, blood and boots it captures. The battle for Mosul, where media outlets have been streaming combat live over the internet, can put anyone deep inside the fog of war in real time.

One thing quickly becomes clear to anyone who hasn’t spent time in a war zone: it gets pretty boring, pretty quickly. Hours of boredom are shredded by moments of action and adrenaline (a car bomb explosion tops the highlight reel), only to soon followed up by more boredom. But that could change as the attacking Iraqi troops, accompanied by roughly 100 U.S. military advisers, press closer to the heart of the city in the days ahead.

While there have been live video feeds from war zones following attacks in recent years, this seems to be the first major contemporaneous coverage of an unfolding military operation. In the campaign’s opening days, a Kurdish news agency and an Iraqi public broadcasting station have been streaming video of Iraqi and Kurdish troops as they push toward Mosul, trying to oust the Islamic State, which has held it for the past 28 months. Mosul’s estimated 1 million people make it ISIS’s last major outpost inside the country and the biggest city in its self-declared caliphate. Qatar’s state-funded al Jazeera and Britain’s Channel 4 have posted the Kurdish feed, from the Rudaw news service, on their Facebook pages.

“Good luck to everyone undertaking this mission,” one of the more than 500,000 viewers of the Channel 4 video feed on Facebook said Thursday. “The lads and lasses of the combined force attempting to clear Mosul are doing the world a great service.” But most commenters didn’t seem pleased by this new window on war. “Can’t believe this is even getting live stream absolute disgrace be ashamed!!!” a second of the 10,000 commenters protested. “We do not want to see killing,” added a third. “This is not entertainment for you to get more viewers.” Some have been put off by the ability to post Facebook’s emojis to the screen, expressing shocks, awes or likes at what they are witnessing. One journalist, Harriet Salem, who writes for The Guardian in Britain, found it surreal:

Those who have been in combat warn that such narrow views can confuse instead of clarify. “Streaming live video puts a straw into the giant, swirling cauldron of warfare which is marked by massive confusion of friendly forces and huge uncertainties about the status and intentions of enemy forces,” says Barry McCaffrey, a retired four-star Army general who led the 24th Infantry Division during its famous “left hook” maneuver deep into Iraq in the 1991 war. “Viewers of live streaming video may sense the brutality and confusion of warfare, but they are extremely unlikely to grasp the composite situation on the battlefield.”

Daniel Bolger, a retired Army three-star general who commanded in Afghanistan and Iraq, puts it more simply: “Sometimes the more you see,” the professor of military history at North Carolina State University says, “the less you understand.”

But there’s more than once audience for this kind of cinéma vérité, says Steve Xenakis, a retired Army brigadier general—including those lured by ISIS to fight. “These young folks are vulnerable to the recruitment by fairly sophisticated ISIS agents and the propaganda they put out, particularly on how successful ISIS has been in battle campaigns,” suggests Xenakis, who spent most of his 28 years in uniform as a psychiatrist. “These folks would follow such videos carefully and have to contend with the facts they are seeing.” That could temper their ardor for martyrdom.

Of course, non-warriors have been watching war for more than 150 years. Matthew Brady was the first to bring visual evidence of bloody battlefields home to Americans. During the Civil War, he put on display in New York City not the traditional “artists’ renderings” from the fight, but actual physical images from the Battle of Antietam, where nearly 23,000 Americans ended up dead, wounded or missing in the bloodiest day in U.S. military history. “Mr. Brady has done something to bring home to us the terrible reality and earnestness of war,” the New York Times said of his 1862 exhibition. “If he has not brought bodies and laid them in our dooryards and along the streets, he has done something very like it.”

Vietnam was famously known as the “living room war,” as television was able to broadcast disturbing scenes from the conflict directly into U.S. homes. Following the Tet offensive in 1968, a South Vietnamese general placed the nose of his revolver and pulled the trigger. You can bet it happened a lot of times, but this act was different: it was broadcast around the world. The war’s constant televised gore led to many unfinished TV dinners on TV trays across the U.S. “The war,” ABC newsman Frank McGee declared, “is being lost.”

Then came 1991’s Persian Gulf War, televised live. TV viewers gasped alongside correspondents as they watched U.S.-launched Tomahawk cruise missiles fly above Baghdad’s broad boulevards toward their targets. War had turned into a video game. “I’m now going to show you a picture of the luckiest man in Iraq,” Army General Norman Schwarzkopf told reporters as he showed them footage from a U.S. warplane of an Iraqi truck crossing a targeted bridge. “And now, in his rear-view mirror,” he added, as a bomb dropped from the plane destroyed the bridge.

Videos from that first Gulf War—irresistible to television networks and the nascent cable-news industry—made clear to Americans who had won after a 43-day war that killed “only” 147 U.S. troops. “By God,” President George H.W. Bush proclaimed as the war wound down, “we’ve kicked the Vietnam syndrome once and for all.” That, of course, proved premature, as his son’s “Mission Accomplished” declaration 12 short years later, just as the second Iraq war was getting started, would prove.

But make no mistake about it: moving images from the front can confirm even wrongheaded notions about conflict. And from here on out, given its ubiquity, the absence of such video validation also will be able to mislead. “Why isn’t there a livestream from the bombing in Yemen?” one Channel 4 poster wondered about the Saudi-led war that (with U.S. help) has killed an estimated 6,800 people since it began 19 months ago. “Oh I forget that’s not really happening is it?” 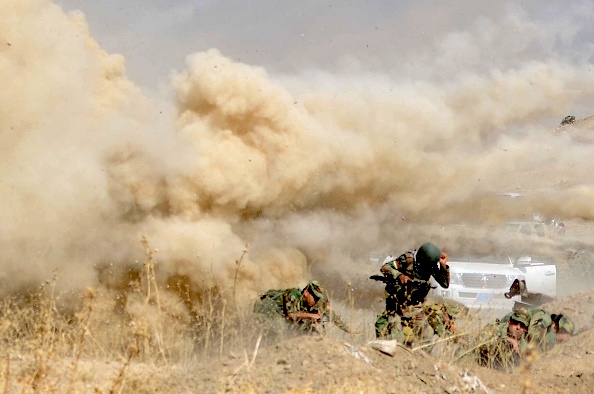 The Fight for Mosul: Kamikaze 2.0
Next Up: Editor's Pick