FDR's Grandson: 'Hillary Clinton Is a True Leader, Donald Trump Is Not'

Hulton Archive and Robyn Beck—AFP/Getty Images
Ideas
By Frank Roosevelt
Roosevelt is the grandson of Franklin D. and Eleanor Roosevelt

In 1933, early in the Great Depression and with the nation on the verge of a second world war, my grandfather, Franklin Delano Roosevelt, famously said ,“The only thing we have to fear is fear itself.” His wise words continue to ring true today.

The challenges we face as a nation are big and complicated: a rapidly changing climate, economic uncertainty, and international and homegrown terrorism. Surely these challenges are different from those of my grandfather’s era, but they’re more than enough to make any American uneasy about our future.

That’s why the stakes are so high in this presidential election. And more than any election I can remember, our options are clear.

I know what true leaders look like because my grandfather was one. Hillary Clinton is a true leader; Donald Trump is not. I choose Clinton.

True leaders believe in the strength of their people. Hillary believes that the American people can weather any storm if they do it together. Over the course of her illustrious career, she has demonstrated the toughness, compassion, and temperament that one must have to meet the challenges of the highest office in the land. She knows that leadership is not about being the loudest voice in the room—it’s about having an open mind and a steady hand. And just like my grandfather, she’s determined to bring everyone together. She believes that in this great country it is our duty to ensure that no one is left out and everyone has a fair shot at success, especially our children.

Mr. Trump, on the other hand, constantly calls America a “weak” country that never “wins” anymore. Not only is this not how a leader should talk about his country, it’s not even true. Did he watch any of the Olympics this summer where United States athletes brought home 121 medals, almost double the number won by the closest competitor? Has he not seen American technology out-perform and out-innovate every other country? When it comes down to it, Trump has made clear he does not believe in the biggest asset of America—our people.

True leaders inspire their people to keep going and always do better. In describing my grandmother, Eleanor Roosevelt, Adlai Stevenson once said “she would rather light a candle than curse the darkness.” He was impressed with her constantly optimistic personality that would never allow her to sulk and simply wish things had been different. True leaders don’t have the luxury to merely “curse the darkness”; they need to actively make things better by finding ways to cut through it. That’s what Hillary has been doing her entire career. After special interests beat her in the fight for universal health care in the 1990s, she got right back up again and helped create the Children’s Health Insurance Program, which now provides health coverage to 8 million children. That’s the kind of leader we need today.

While a true leader lights the path for the rest of us in times of uncertainty, a coward stokes fear hoping it will convince people to do whatever he says. Regardless of the truth, Trump tries to convince Americans that rapists and murderers are flowing in from Mexico, and that crime has been going up for years. Not only that, he has put forward almost no serious policy proposals to tackle our country’s biggest problems. This reveals a fundamental lack of leadership: He’s not interested in coming up with solutions—he just likes blaming people for problems.

My grandfather guided our country through some of the most difficult periods in our history. Hillary Clinton embodies his spirit—that, together, we can meet all the challenges we face with confidence and fierce determination. In contrast, Donald Trump tries to use fear as a political weapon—pitting Americans against one another, supposedly to protect us from a scary future—in order to benefit only himself.

What FDR said in 1933 is still true today: The only thing we have to fear is fear itself. I’m proud to support Hillary Clinton as the next president of the United States. That’s the choice in this election. 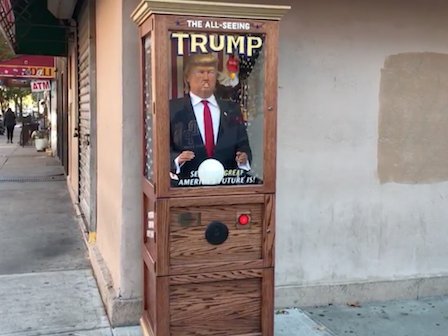