The final debate Wednesday between businessman Donald Trump and former Secretary of State Hillary Clinton resembled something closer to a white-knuckled episode of The Jerry Springer Show, the eponymous chair-hurling, maybe-baby-daddy tabloid talk show, than a policy exchange of equals vying to lead the most powerful nation on earth.

Flanked in the audience by the mother of a slain U.S. diplomat killed in the Sept. 11 attack in Benghazi and the estranged, Kenyan-born half-brother of President Barack Obama, both his special guests, Trump used his final opportunity opposite his Democratic rival to hurl rhetorical chairs at women, at Latinos—and, indeed, at sound electoral strategy.

In a matter of days, Americans will elect their next president, the individual seen most fit by the collective wisdom to shepherd the nation’s economy and to control the nuclear codes. But even now, with the election cresting the horizon, Trump continues to stage-manage his campaign as though it were a tawdry reality television competition.

Imagine how a President Trump might organize seating at an official state dinner: the South Korean envoy at North Korea’s table, Palestine sharing elbow space with Israel, Pakistan refusing to pass the pepper to India. The attendance would be tremendous, the most-watched state dinner in American history. Believe me.

Indeed, if there was any justice in this world, this year’s seemingly unending campaign would, in fact, be a reality competition. Americans would not vote to install a candidate in the White House but to boot one from the island. (And rest assured, too, that Trump would win that elusive third Emmy for his performance, assuming those effete Hollywood elites don’t rig the system.)

Trump’s enablers, like the uber-polished Kellyanne Conway, pledged to conservative skeptics like myself that our nominee would treat this election—and all those down-ticket candidates whose fates are jointly tied to his as sure as cement shoes in a deep lake—with the gravity it deserved. That he would pivot. That he would win.

There were moments Wednesday when the fantasy of a well-behaved, almost-persuasive Trump seemed possible, that in this late hour the Republican might breathe new life into his hobbled bid even as he sought to disorient Clinton with cheap psychological theatrics seemingly on loan from the producers of the “Real Housewives” franchise.

But Trump’s staging didn’t rattle Clinton, who delivered a balanced, if demure, performance. Instead, it was Trump who repeatedly swam upstream for his opponent’s calculated bait.

Asked if he would accept the results of the election next month, Trump said he would keep America “in suspense.” Suspense! You’ll have to tune in next week to see if the insurrection materializes, folks! 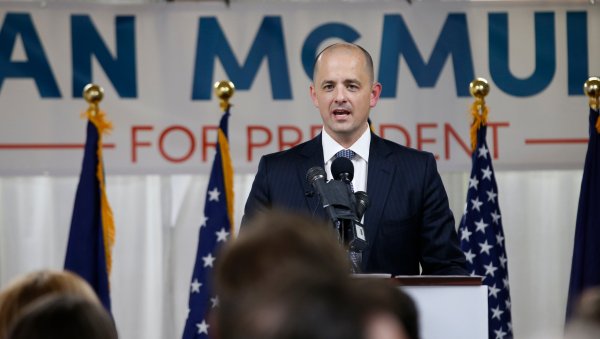 How I'd Fight Poverty as President
Next Up: Editor's Pick