'This Is a Forged Picture': Bashar Assad Disputes 'Boy in the Ambulance' Account

Five-year-old Syrian boy Omran Daqneesh sits alone in the back of the ambulance after he sustained injuries during an airstrike targeting the Qaterji neighborhood of Aleppo on Aug. 17, 2016.
Mahmoud Rslan—Anadolu Agency/Getty Images
By Andrew Katz

“May I show you a picture?”

That was the question posed to Syrian President Bashar Assad in an interview with Swiss media released this week.

At this point in the conversation, the pair had spoken for nine minutes. Assad blamed the armed opposition (his name for them: “terrorists”), laid responsibility on the West and other Gulf nations (“supporting those terrorists with money, with logistics support”) and the killing of civilians in schools, in the streets, in hospitals (“every war is bad war”).

The interviewer reaches into his pocket. “This young boy has become the symbol of the war,” he says, pulling out a small image of the Aleppo boy who was rescued on Aug. 17 after local medical personnel said an airstrike destroyed his family’s home. “And you know this picture?”

“His name is Omran, 5 years old,” the interviewer says.

“Covered in blood,” the interviewer continues.

The interviewer then asks if the president has anything to say to the Daqneesh family. Instead, Assad disputes the account of how the night unfolded, slams the civil defense workers (known as the “White Helmets“) who rescued the boy and claims the viral pictures that emerged were manipulated. “This is a forged picture and not a real one,” he alleges. “We have real pictures of children being harmed, but this one specifically is a forged one.”

The interviewer doesn’t press him on this, instead moving on to a range of topics for the remainder of the meeting.

Assad’s claim is not matched by those of his wife, Asma, who sat for a rare interview with Russian media released a day earlier. Asked by a gushing interviewer about Omran, she took the opportunity to smear western media for coverage she insists is focused on tragedies that “suited” their agendas, but did not deny the boy’s story as her husband does. “These are all children, they are all innocent children and they are all a loss to Syria irrespective of which side of the conflict we support,” she says. “And as a Syrian, I am personally saddened by the loss of every single child, whether it is Alan [Kurdi] or Omran or the many, many others, whose names did not reach western headlines.”

Mahmoud Rslan, the photographer, recalled a chaotic scene in the rebel-held Qaterji neighborhood. The father was bleeding. The mother was in pajamas. Part of the building had been reduced to rubble. There were other bodies on the ground. After the boy was placed in the ambulance, he said, “while taking the photo at looking at the boy, I was crying.” Mustafa al-Sarout, the videographer, said the boy, his face covered in blood and dust, was traumatized. “He was just looking at us with a strange look, as if he was wondering what happened to his family.”

Dr. Mohammad, a longtime surgeon in Aleppo, first saw the boy in the emergency room. “He was awake but he didn’t speak, maybe he was afraid or in shock or in pain from the wound,” he said. A nurse named Mohamad Abo Rajab recalled the boy’s examinations, including an X-ray and an ultrasound of his abdomen. After two hours, they said, he was discharged. Days later, the boy’s older brother, 10-year-old Ali, died in the hospital from wounds he sustained during the attack.

None of these four men who met Omran disputed what happened that night. They just insisted, after more than five years of war, it wasn’t unique. 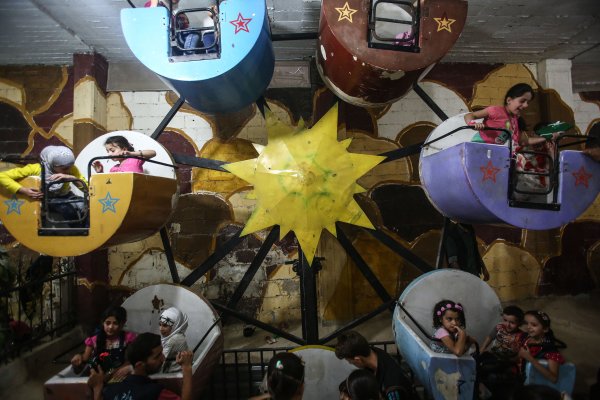 Go Inside an Underground Amusement Park in Syria
Next Up: Editor's Pick