Sub-Saharan migrants and refugees begging for their release in a detention center in Surman, Libya.
Narciso Contreras for Fondation Carmignac
By Karl Vick

For migrants from sub-Sahran Africa, Libya was a destination even before Muammar Qaddafi fell in 2011, and the country turned itself in a boat launch to Europe. The dictator fancied himself as a munificent overseer of the continent below. When liberation struggles were underway against colonial masters, Qaddafi sent guns and money, and when the newly independent nations set out to organize themselves as a bloc, he not only helped fund the African Union, but proposed an even more ambitious configuration, The United States of Africa. It never went anywhere, not least because the dictator was, of course, more Arab than African. (The north African expanse of the Mahgreb, which includes Libya, is part of Africa on the maps, but separated from the sub-Saharan African region where migrants hail from by both desert and culture.)

But Libya has oil, and therefore money, so those who had neither set off across the Sahara to get what they could. More than a million Africans were working in Libya when Gaddafi was deposed in 2011. They didn’t make much, but it was enough to send something back home, and endure the resentments of Libya’s Arab population, much of which persisted in regarding blacks as their inferiors. In 2000, more than 600 African migrants were killed at the hands of Libyan mobs shouting “blacks must go.”

Read More: Between Two Worlds: Libya Has Devolved Into a Brutal Marketplace of Human Lives

All of which sets the stage for what Libya is today: A trading floor for African lives. Since Gaddafi’s demise, no coherent government has taken control of the country. The political void has been filled by armed groups—including Islamists affiliated with ISIS and al Qaeda—competing for territory. But in terms of economics, Libya has devolved into a primitive state. In addition to oil, it now trades in humans.

“I came to Libya to document the migrant crisis, the humanitarian crisis of migrants trying to reach Europe through Libyan territory,” says Narciso Contreras, an acclaimed photojournalist who made three trips to the country this year. “But actually what I found going in Libya is a market.”

Images of Contreras’ discovery appear in the Oct. 31 print edition of TIME, and in the LightBox photo gallery online at Time.com. They show despondent men and women confined in warehouses, prisons and courtyards, migrants reduced to chattel and sold from smuggler to militia to trafficker, and back again —and often paying for the privilege. Eventually, many will be placed on a boat pointed toward Europe. But that’s often only after months, even years in the purgatory of Libya. Half of migrants who reach southern Italy report having been held against their will inside Libya—often for ransom, according to a new study by the International Organization for Migration, released Oct. 18. For more than a third, their journey took more than six months.

Those journeys begin at home, typically in West Africa (though in recent months, a third of African migrants arriving in Italy began their journey in the Horn of Africa, many fleeing political persecution in Eritrea, Ethiopia, Somalia or Sudan). West Africans typically migrate for economic reasons, setting off from Senegal, Nigeria, Ivory Coast. The smugglers they pay to bring them north are part of an interlocking network frequently extending all the way to the coast. The business of moving humans has overtaken goods smuggling in Libya since 2011. “I’ve seen very widespread racism and xenophobia in Libya,” says Hanan Salah, senior Libya researcher for Human Rights Watch. “Dark skinned people in general face discrimination. If you’re a Syrian Arab who speaks the language, you’re definitely better off.”

Contreras, supported by the Carmignac Photojournalism Award, spent weeks in the country’s lawless south, cultivating contacts with the desert tribes that move the migrants from neighboring Niger via “unofficial routes”—including the dry river beds that double as smuggler’s roads, according to a May study for West Point’s Combating Terrorism Center. At one point, the photographer arranged to meet a convoy carrying 1,500 migrants at a pass in Libya’s border. If the number sounds large, Contreras says one U.N. official told him that 3 million migrants have come into the country. Perhaps 60 percent end up staying, often as indentured servants earning their way out of detention centers or passage on a boat. They are vulnerable both to their controllers and to militiamen who stop them at a checkpoint and deliver them to detention centers that double as clearing houses.

Read More: Inside the Libyan Detention Centers Where Humanity Ceases to Exist

“This is not just smuggling migrants. It’s a market where migrants are bought and sold on a daily basis,” Contreras says. “And detention centers serve as distribution points.”

Nominally under control of one of two competing, interim governments, the centers are in fact controlled by militias, according to human rights activists. So if, under Gaddafi, the country was a destination for economic migrants, it has reverted to something from the mercantile era, with Arabs trafficking in black bodies. “It’s a kind of slavery,” says Contreras. “It is something from the past.” He describes meeting Rasheed, a Ghanaian who had been a taxi driver in his home country, and had been unable to produce the $200 to $700 bribe that would release him from detention in Zawiyah, on the northwest coast. Rasheed had then become the property of a militia commander, who had him serve coffee to the photographer as the commander looked out at the sea, which militias also control.

“Since 2011, the Libyan economy has been in freefall,” Contreras later wrote. “There is no money in the banks, public sector workers go unpaid and the black market is booming. People fetch a high price.” 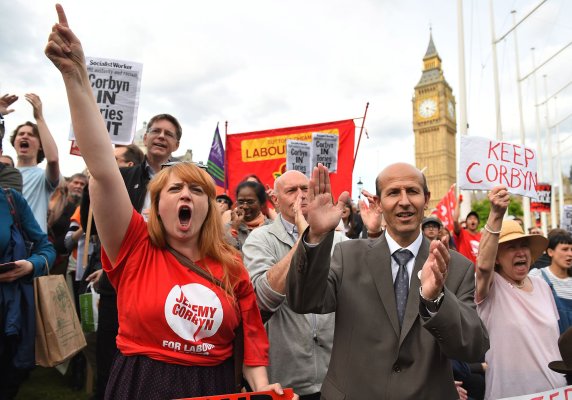 Red on Red: A Divided Labour Is Struggling to Survive
Next Up: Editor's Pick