Early on in the final presidential debate on Wednesday night, both Donald Trump and Hillary Clinton were asked about their stance on abortion and Roe v. Wade, the landmark 1973 Supreme Court case that legalized abortions.

Hillary Clinton answered in a way that many of her supporters have praised as an eloquent and passionate plea on why women should ultimately bear the responsibility of making decisions about their health. Donald Trump did not.

After wavering on whether he wants to overturn Roe v. Wade, Trump said that the justices he’d appoint to the Supreme Court would “automatically” repeal the controversial decision. And then he painted a gruesome — and largely inaccurate — picture of partial-birth abortions. His comments caused a furor on Twitter with both anti-abortion and pro-abortion rights voters, who called his comments misleading.

Though Trump has been firmly anti-abortion since he began his campaign for the presidency, he has a history of supporting abortion rights for women. In an October 1999 interview with late journalist Tim Russert, Trump said he was “very pro-choice” — even if he didn’t like the principles behind abortion. “I hate the concept of abortion. I hate it. I hate everything it stands for. I cringe when I listen to people debating the subject. But you still — I just believe in choice.” If given the opportunity, Trump told Russert that he wouldn’t ban “partial-birth abortions.”

Partial-birth abortion, as NPR noted, is a political — not medical — term meant to describe a procedure known as intact dilation and extraction, also known as later-term abortion. In the procedure, which can only be done late in pregnancy, the fetus is removed from a woman after dilating her cervix. According to NPR, dilation and extraction is preferred because it keeps the woman’s cervix intact, which isn’t always the case with other later-term abortion techniques.

Congress passed The Partial-Birth Abortion Ban Act in 2003, which banned doctors from performing later-term abortions. The Supreme Court upheld the law in 2007. Clinton voted against the legislation while she represented New York in the Senate, a fact Trump criticized her for on Wednesday night.

As NPR noted, later-term abortions are already rare. According to data from the Guttmacher Institute, a research and policy organization that publicly supports abortion rights, only about 1.5 percent of abortions take place 20 weeks or later after conception. Planned Parenthood Federation of America says that later-term abortions are “done only in cases when the woman’s life is in danger or in cases of extreme fetal abnormality.”

And Clinton articulated that sentiment on Wednesday night.

“Well, that is not what happens in these cases. And using that kind of scare rhetoric is just terribly unfortunate,” Clinton countered. “This is one of the worst possible choices that any woman and her family has to make. And I do not believe the government should be making it.”

On abortion and the Supreme Court

Though Trump stuck to the GOP’s anti-abortion line on Wednesday night, some members of his own party were irked that he didn’t explicitly say he wanted to repeal Roe v. Wade — even though Wallace asked Trump three times. “Well, if we put another two or perhaps three justice on, that’s really what’s going to be — that will happen,” Trump said. “And that’ll happen automatically, in my opinion, because I am putting pro-life justices on the court.”

Of course, the Supreme Court couldn’t automatically overturn Roe v. Wade — a similar case would have to make its way onto its docket (which isn’t all that easy). And the court has a recent precedent of protecting abortion rights: just this June, the Supreme Court struck down a Texas law that put significant restrictions on abortion in the state.

But as promised, Trump would likely appoint anti-abortion justices to the court if he got the chance. In May, Trump’s campaign unveiled its list of potential Supreme Court nominees, and it included at least three names that should scare pro-abortion rights voters. Congress blocked the confirmation of William Pryor, a federal judge on Trump’s list, to the 11th circuit in 2003, in part, because of his comments on Roe v. Wade. Pryor called the ruling a “creation out of thin air to murder an unborn child” and the “worst abomination in the history of constitutional law.” (George W. Bush appointed Pryor to the 11th circuit as a recess appointment in 2004.)

Also on the list? Raymond Gruender and Steven Colloton, two federal judges serving on the 8th Circuit, which has handed down a number of criticized decisions on abortion. In 2008, Gruender and Colloton signed onto a decision that upheld a law that required providers to tell women that abortions “terminate the life of a whole, separate, unique, living human being” and that having an abortion leads to an increased risk of suicide, which hasn’t been proven.

On punishing women for getting abortions

During Clinton’s response to Wallace’s questions on abortion, she criticized Trump’s record on the issue — including his March comment that women who get abortions should be punished. “You have to ban it…There has to be some form of punishment,” Trump said to MSNBC’s Chris Wallace at a town hall event after trying to dodge questions about his position on abortion.

After the remarks received sharp criticism, including from some in his own party like Ohio Governor John Kasich and Senator Ted Cruz, Trump walked back the comment, saying in a statement: “[T]he doctor or any other person performing this illegal act upon a woman would be held legally responsible, not the woman. The woman is a victim in this case as is the life in her womb. My position has not changed — like Ronald Reagan, I am pro-life with exceptions.”

Read more: ‘Punishing’ Women is What the Reproductive Rights Battle is All About

Pence, who is firmly anti-abortion, has signed some of the country’s toughest abortion laws in Indiana, including a law that required women to bury or cremate aborted fetuses. Additionally, a 2009 feticide law in Indiana, which was meant to increase penalties against those who harmed a pregnant woman, was used to prosecute Purvi Patel, a 33-year-old who induced her own abortion. Patel was convicted of feticide in 2015 and sentenced to 20 years in prison, becoming the the first woman in the U.S. to be charged, convicted, and sentenced for ending her own pregnancy. In July, an Indiana appeals court overturned Patel’s conviction, saying that the state’s feticide laws weren’t indented “to prosecute women for their own abortions.” She was released in September.

As many women have said, Trump’s rhetoric on abortion can have very real consequences for women. 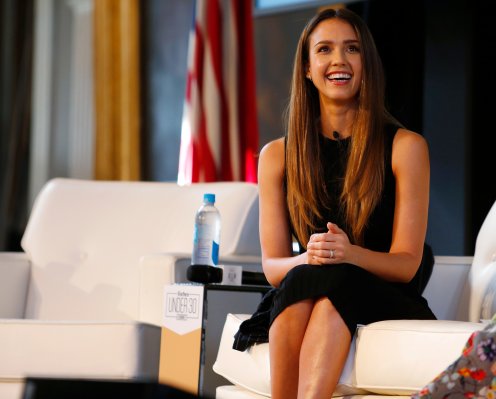