What to Know About the Controversy Over Child Refugees Arriving in the U.K.

This aerial view taken on Aug. 16, 2016, in Calais, northern France shows tents of the "jungle" camp where over 9000 migrants live according to different NGOs.
PHILIPPE HUGUEN—AFP/Getty Images
By Suyin Haynes

The first child refugees arrived in the United Kingdom from the ‘Jungle’ refugee camp in the coastal town of Calais, France, after months of delays. Yet the arrival was marked with controversy, as some politicians and the media suggested the applicants were not minors at all.

Here is everything you need to know about the children being transferred to the U.K. and how they have been received in Britain:

What is the ‘Jungle’ and why are refugees leaving there?
The “jungle” refugee camp in Calais is situated on the French coast of the English Channel, separating Europe from the U.K. In September, the U.K. based charity Help Refugees estimated there were about 10,188 migrants and refugees in Calais, with more than 1,000 being unaccompanied children younger than 18. As TIME reported, the jungle is an illegal settlement monitored and run largely by aid agencies, with little or no government or U.N. involvement. The forced relocation of those living in the camp comes after French President Francois Hollande announced late last month a plan to close the site down amid mounting local pressure and criticism of its squalid conditions. The closures are expected to begin early next week.

Why the particular focus on child refugees?
A large share of asylum seekers are children. Reuters reported earlier this year that children represented one third of the 1.26 million first-time asylum applications filed in the E.U. in 2015. Britain, like other E.U. member states, is bound by the Dublin Regulation, an E.U. law which grants asylum to children who already have relatives living in the U.K. Eligibility for family reunification under the Dublin Regulation follows the definition of the 1989 U.N. Convention on the Rights of the Child, which defines a child as every human being below the age of 18 years.

The U.K. government also passed the Dubs Amendment to the Immigration Act earlier this summer to make provisions for supporting unaccompanied refugee children to the U.K. As reported by The Guardian, it was originally anticipated that around 3,000 child refugees would be relocated and rehoused in Britain, but progress has been slow – no children have been admitted to the U.K. under the provisions of the Dubs Amendment, according to the British Red Cross.

Why has this policy been controversial?
Because some in the U.K. don’t believe the first batch of child refugees are all minors. Media outlets and politicians argued that the refugees looked older than the age of 18 based on photographs of their arrival in the U.K. Conservative MP David Davies tweeted: “These don’t look like ‘children’ to me. I hope British hospitality is not being abused.” He was supported by colleague Jacob Rees-Mogg, who said it was “very worrying” that “older migrants are reported to be pushing children out of the way”, as reported by the BBC.

Images and reporting from British press outlets The Sun, The Daily Mail and The Daily Express all expressed skepticism over the ages of the child refugees photographed arriving in Britain. After former soccer star and BBC presenter Gary Lineker called the media coverage “hideously racist,” he was himself placed on the cover of The Sun with calls for his ouster from the BBC — a report to which he responded with a tweet:

How does the U.K. check the ages of refugees?
In a statement to TIME, a Home Office spokesperson said “We work closely with the French authorities to ensure that the cases applying to come to the UK qualify under Dublin,” and noted that “on age we use a number of determining factors.” The Home Office said that these factors include the provision of credible and clear documentary evidence to prove the claimed age of children and that the individual has a physical appearance/demeanour which does not strongly suggest they are significantly over 18 years of age.

But practically, it’s very difficult to determine the age of someone. In a statement to The Independent, Rowan Farrell, co-founder of Refugee Info Bus, said “A lot of the 16 and 17 year-olds in the camp look very weathered. They’ve been living in tents in Calais and before that they’ve been through things we can’t possibly imagine.” The Independent also reported that health professionals have criticised dental tests and X-ray examinations, noting that the evidence is not always accurate and can lead to incorrect estimations of a person’s age by up to three years. Earlier this week, the British government officially rejected calls for more stringent health tests to be carried out on the new arrivals in Britain, such as dental checks and bone density X-rays, to determine their ages.

What do aid groups say?
Other organisations are calling for greater measures to be taken by the U.K. government to aid more child refugees from the Calais camps. Mike Adamson, CEO of the British Red Cross, told TIME, “It isn’t helpful to describe one group of refugees as more deserving of our help than another. It is true that there are many young children in Calais who don’t have family in the UK. This is why it is so important that the Dubs amendment is enacted as a matter of urgency, and that the government also begins transferring refugee children without family to the UK –provided it is in their best interests – as soon as possible.” 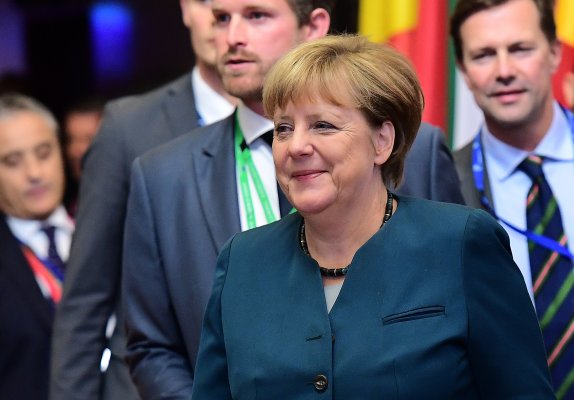 What Language Will Be Used for Brexit Negotiations? Not English, Necessarily
Next Up: Editor's Pick