This Is What Drug-Abuse Education Looks Like in Indonesia

Dancing to the tune of viral song “PPAP (Pen-Pineapple-Apple-Pen),” police officers in the Indonesian city of Balikpapan urge young people to say no to drugs and alcohol.

Instead, they say, young people should get their kicks from snacks like fritters, known as gorengan in Indonesian, and es cendol, an iced dessert.

“I have es cendol, I have a beer,” a policeman sings in the video posted on the Facebook page of the Balikpapan police in East Kalimantan province. He then says “ugh” to the beer and opts for es cendol. Similarly, he sings “I have gorengan, I have drugs — ugh. Gorengan.”

Es cendol (with ingredients like rice flour, palm sugar and coconut milk) and gorengan (ranging from banana fritters, deep-fried tofu to crispy fried chicken) aren’t exactly healthy, however, thanks to their high-calorie content.

Drinking is generally frowned upon in Indonesia, a Muslim-majority country. Conservative Islamic parties are pushing for an alcohol-prohibition bill, but lawmakers are doubtful that it will be passed in parliament by the end of this year.

Indonesia also has one of the toughest antidrug regimes. Under the leadership of President Joko Widodo, the country has executed a total of 18 convicted drug traffickers since 2015. Drug users are often jailed or sent to rehabs in prisons, partly contributing to overcrowding of prisons. 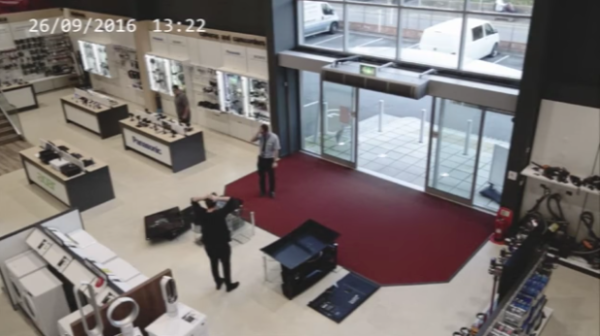 Is This Viral Video of a Clumsy Customer in a TV Store a Hoax?
Next Up: Editor's Pick