Buoyant after wrapping up the third and final presidential debate, Hillary Clinton stepped onto her campaign plane late Wednesday night and continued to hammer Donald Trump for suggesting he might not accept the result of November’s election.

“It was horrifying what he said,” Clinton told reporters, referring to her Republican opponent’s remark that he would keep the American public “in suspense” about whether he would question the outcome of a race that he says is rigged. “we are a country based on laws. And we’ve had hot, contested elections going back to the very beginning, but one of our hallmarks has always been that we accept the outcomes of our elections.”

America has “free and fair elections,” the Democratic nominee continued. “Somebody wins and somebody loses. So what he said tonight is part of his whole effort to blame somebody else for his campaign.”

Asked about Trump’s invective during the final debate in Las Vegas, Clinton dismissed his remarkss. “I just didn’t pay any attention to that,” she said. She added that she was dismayed that after a host of U.S. intelligence agencies have fingered Russia as the culprit in cyber-attacks that have leaked a steady steam of campaign staffers’ emails, Trump has refused to accept that conclusion.

“He refuses to admit that it’s true and condemn it for what it is, which is a blatant effort to try to interfere in our elections,” Clinton said.

The former Secretary of State said she wasn’t worried that the hacked emails published by Wikileaks, which have included jabs at Democratic figures, would affect party unity.

“Not at all,” she said. “Bernie Sanders is out there working hard every day to get me elected. I’m looking forward to working with everybody in our party. But as I said in the closing, which they gave us at the last minute, I’m reaching out to all Americans. Democrats, Republicans, independents.”

Clinton was also questioned about a recent video, published by conservative provocateur James O’Keefe, which appeared to implicate a pair of Democratic operatives in dirty tricks.

“You know, I know nothing about this,” she told reporters, adding she couldn’t deal with every one of Trump’s “conspiracy theories.” And with that, she beat a retreat back to her seat, one of the last hurdles to her nomination behind her.

Meantime, Clinton spokesman Nick Merrill noted that advisor Philippe Reines, who played Trump in Clinton debate prep, stepped into character by attempting to mimic the Republican nominee’s wardrobe. Merrill said Reines wore a red Brioni tie—”a little too long,” he added—lifts in his shoes, Trump cufflinks and a discontinued Trump-branded watch he found on the Internet. 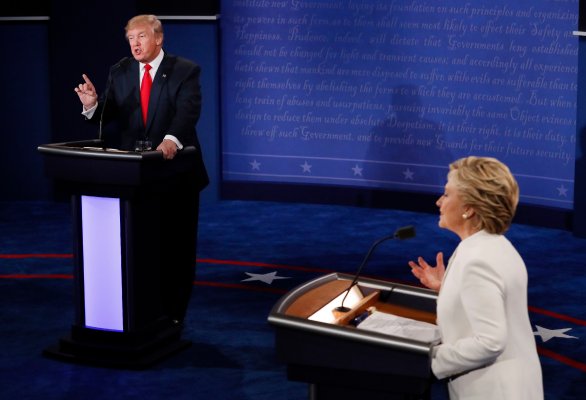 7 Key Lessons From the Final Debate
Next Up: Editor's Pick