Yes, Donald Trump Thought the Emmys Were Rigged Against Him

Donald Trump thinks the Emmys were rigged against him due to politics, a position he reaffirmed during the final presidential debate Wednesday.

During a discussion of Trump’s recent claims that the presidential election might be rigged against him, Hillary Clinton noted that Trump had made the same argument about the annual television awards back when he hosted The Apprentice.

“There was even a time when he didn’t get an Emmy for his TV program three years in a row and he started tweeting that the Emmys were rigged against him,” said Clinton.

From 2004 to 2006, The Apprentice went up against rival reality show The Amazing Race for four Emmy awards, losing each time. Two awards were for “outstanding reality competition program” and two were for technical categories.

Several years later, Trump tweeted criticism of The Amazing Race and the Emmys, saying that the awards show had “no credibility” and the “same shows” win “over and over again” due to politics.

“The Emmys are all politics, that’s why, despite nominations, The Apprentice never won—even though it should have won many times over,” he tweeted.

At the debate, Trump doubled down on his complaint about not winning an Emmy. 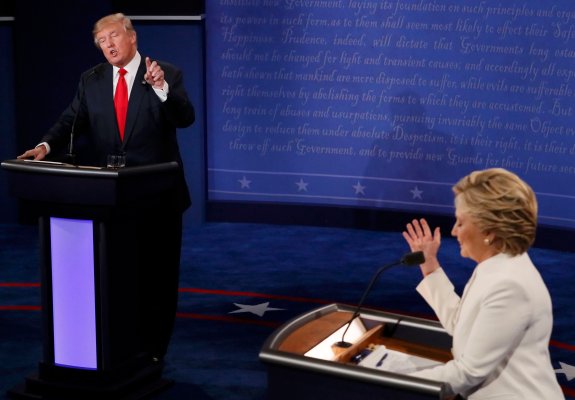