15 Foods That Don't Expire For Years

Danny Kim for TIME
By Dana Leigh Smith / Eat This, Not That!

Get this: Up to 40 percent of safe-to-eat food produced in America never makes it to people’s plates. Not only does that equate to 70 million tons of food waste per year, according to nonprofit group Feeding America, that’s tons of money thrown out the window—up to $161 billion by some estimates. And it’s not that we’re all just super wasteful; those “sell by” and “use by” stamps can be downright confusing. I know I’ve thrown away things like old brown sugar or mustard simply to be “on the safe side.” But in many instances, playing it safe is actually totally unnecessary.

Since no one likes to waste their hard-earned cash or make unnecessary grocery runs, we’ve outlined a host of good-for-you kitchen staples (many of which you probably already have in your kitchen) that last for years—yes, we said years—despite what it says on the label. Your wallet will thank you.

Basmati, wild, jasmine and white rice all keep for years, so long as they remain tightly sealed and that the harvested crop didn’t have any bug eggs among them when packaged. (This is more common than you think.) Once you open the box or bag, store in an airtight container or a freezer bag to keep the grains fresh. The only type of rice that these rules don’t apply to is fiber-rich brown rice. It contains oils in it that cause it to go rancid after about six months.

Eat This, Not That!: 20 Tips and Tricks for Better Breakfast Casseroles

Unopened mustard can last for up to three years! Once the seal is cracked, you’ve got about a year before it goes bad—although some opened varieties can last for up to two years. Mustard is a major metabolism-booster. In fact, eating a mere teaspoon (about 5 calories) of the condiment can boost metabolism by up to 25 percent for several hours after eating it, according to an Oxford Polytechnic Institute study. Researchers say the benefits may be attributed to capsaicin and allyl isothiocyanates, phytochemicals that give the mustard its characteristic flavor.

Beans should be an essential item in any health-conscious person’s pantry. And while the canned version can be loaded with extra sodium and other additives, dried beans have none of that unwanted junk, but all of the fiber and nutrients you need. They also have a lengthy shelf life. According to the U.S. Dried Bean Council, pulses like dried pinto, kidney, black-eyed, lima, and kidney beans can keep up to a year in an airtight container. Just be sure to store them somewhere cool and dry, away from direct sunlight. For delicious ways to cook with all of your favorite beans, check out these 25 Recipes and Ideas for Pulses.

According to the USDA, low-acid canned goods like vegetables, meat, and fish stay fresh for up to five years. That’s because they’re sterile, making it impossible for bacteria to intrude and ruin your grub. Word of warning, though: No matter how fresh the can may be, don’t eat its contents if it’s bulging or leaking. Although botulism is rarely found in commercial canned goods, damaged products have a higher chance of contamination—so in this case, it’s better to err on the side of caution. Have some leftover cans of protein that are on their last leg? Use up the meat with the help of these 15 Creative Ways to Use Canned Fish.

White vinegar, which is commonly used in pickling and Thai and Vietnamese cooking, is super acidic. As a result, it’s basically self-preserving and its shelf life is essentially indefinite, according to the Vinegar Institute.

Eat This, Not That!: 46 Best Grocery Shopping Tips

You know that bottle of fancy tequila your co-worker gifted you three years ago? Well, you can drink it or regift it with confidence because hard liquor doesn’t really ever go bad—so long as it’s stored in a cool, dry place at least. That said, we can’t promise the flavor will be as perfect as when you first cracked open the bottle.

Whether you prefer table salt or sea salt, you can confidently sprinkle it on your food no matter how long it’s been hanging out in your spice cabinet. When stored in a cool, dry place, it remains fresh indefinitely. The only exception to the rule: iodized salt, which only lasts for about five years.

Unopened olives can last for up to three years, so go ahead and stock up on a few jars. They’re sure to come in handy when last minute house guests come by. They can be used for everything from martinis to appetizers and salads.

If you’re like me, you might avoid recipes that include ingredients you don’t regularly use, but if that ingredient happens to be cornstarch, you might as well just buy it. When stored in a cool and dry area, the thickener is safe to eat indefinitely.

If you’re going to eat something sweet and sugary, it’s always best to get the most bang for your caloric buck. That’s why nutrition experts love honey, which carries antiviral and antibacterial properties. Another reason to love the sticky sweetener: its near-infinite shelf life. It may get grainy, hard, or change color, but its antibiotic properties protect the taste and keep it from spoiling. Soften hard containers by placing them in a bowl of warm water and stirring the honey until it melts.

If you typically opt for imitation vanilla over pure vanilla extract because of the cost, you may want to reconsider your habit. While the fake stuff goes bad in as little as two years, the real stuff has an indefinite shelf life—and it tastes better, too.

Eat This, Not That!: 50 Overnight Oats Recipes for Weight Loss

There are loads of reasons to give three cheers for chia seeds. Not only do they contain all nine essential amino acids, they’re also a potent source of fiber and ALAs (a type of omega-3s that can decrease the risk of heart disease). And when stored in an airtight container in the fridge, they remain tasty and safe to eat for up to a year.

Even if you wouldn’t dare dream of sipping the stuff, many cooking and baking enthusiasts keep instant coffee in the kitchen to infuse a coffee flavor into recipes. Since the powder is more concentrated than the freshly brewed stuff, it’s actually a great tactic—and an affordable one at that. Once you spend a buck or two on a container, it should last up to two years if left unopened.

While we aren’t fans of loading up on any type of sugar—white, brown, or powdered—we understand that people like to keep the stuff on hand in case a baking emergency arises. But we do hope, however, that it takes you a few years to go through your bags of the stuff. And considering sugar doesn’t ever go bad, you should really make this a personal goal. To keep the sweet stuff from hardening into chunks or attracting pests, store it in an airtight container or seal it in a plastic bag.

Pure, Grade-A maple syrup is one of the best natural sugars out there. It’s got a relatively low glycemic index and also provides trace amounts of muscle-repairing manganese and anti-inflammatory compounds. It also lasts forever when stored in the refrigerator or freezer—which means you’ll be prepared for pancakes or waffles when a craving hits! Make sure things like your syrup, sugar, and all pantry items are kept clean and tightly closed. 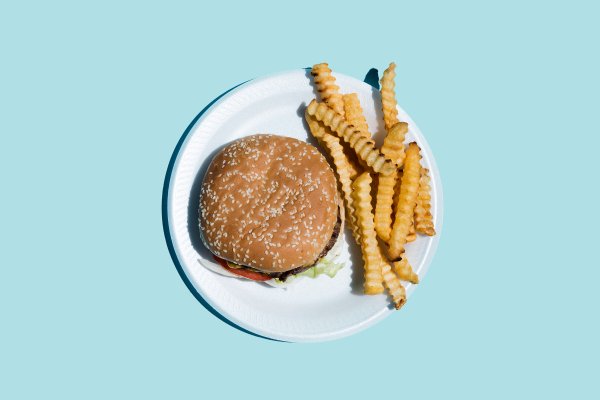 A Super-Early Dinner Can Burn More Fat: Study
Next Up: Editor's Pick