Little, Brown and Company
Ideas
By Stephenie Meyer
Stephenie Meyer is the author of the Twilight series, The Host and most recently The Chemist.

On Nov. 8, Twilight author Stephenie Meyer will release a new thriller for adults, The Chemist, about an ex-secret agent. In this selection, the main character meets with her former handler, who proposes one last job in exchange for her freedom from a life on the run.

Across the street was Carston’s favorite lunch spot. It was not the meeting place she’d suggested. She was also five days early.

She came at him from behind, taking the same path he had just a few minutes earlier. His food had arrived—a chicken parm—and he seemed to be totally absorbed in consuming it. But she knew Carston was better than she was at appearing to be something he was not.

She dropped into the seat across from him with no fanfare. His mouth was full of sandwich when he looked up.

She knew that he was a good actor. She assumed he would bury his true reaction and display the emotion he wished before she could catch sight of the first. Because he didn’t look surprised at all, she assumed she’d taken him completely unawares. If he had been expecting her, he would have acted like her sudden appearance had shocked him. But this, the steady gaze across the table, the unwidened eyes, the methodical chewing—this was him controlling his surprise. She was almost 80 percent sure.

She didn’t say anything. She just met his expressionless gaze while he finished masticating his bite of sandwich.

“I guess it would be too easy to just meet as planned,” he said.

“Too easy for your sniper, sure.” She said the words lightly, using the same volume he had. Anyone overhearing would think the words a joke. But the two other lunch groups were talking and laughing loudly; the people passing by on the sidewalk listened to earphones and telephones. No one cared what she was saying except Carston.

“That was never me, Juliana. You must know that.”

It was her turn to act unsurprised. It had been so long since anyone had addressed her by her real name, it sounded like a stranger’s. After the initial jolt, she felt a small wave of pleasure. It was good that her name sounded foreign to her. That meant she was doing it right.

His eyes flitted to her obvious wig—it was actually quite similar to her real hair, but now he would suspect she was hiding something very different. Then he forced his eyes back to hers. He waited for a response for another moment, but when she didn’t speak he continued, choosing his words carefully.

“The, er, parties who decided you should…retire have…fallen into disfavor. It was never a popular decision to begin with, and now those of us who were always in disagreement are no longer ruled by those parties.”

It could be true. It probably wasn’t.

He answered the skepticism in her eyes. “Have you had any…unpleasant disturbances in the past nine months?”

“And here I was thinking that I’d just gotten better at playing hide-and-seek than you.”

“It’s over, Julie. Might has been overcome by right.”

He winced, hurt by the sarcasm. Or pretending to be.

“Not so happy as all that,” he said slowly. “A happy ending would mean I wouldn’t have contacted you. You would have been left alone for the rest of your life. And it would have been a long one, as much as that was in our power.”

She nodded as if she agreed, as if she believed. In the old days, she’d always assumed Carston was exactly what he appeared to be. He had been the face of the good guys for a long time. It was almost fun now in a strange way, like a game, to try to decipher what each word actually meant.

Except then there was the tiny voice that asked, What if there is no game? What if this is true…if I could be free?

“You were the best, Juliana.”

“Dr. Barnaby was the best.”

“I know you don’t want to hear this, but he never had your talent.”

He raised his eyebrows.

“Not for the compliment,” she explained. “Thank you for not trying to tell me his death was an accident.” All of this still in the lighthearted tone.

“It was a poor choice motivated by paranoia and disloyalty. A person who will sell out his partner always sees the partner as plotting in exactly the same way. Dishonest people don’t believe honest people exist.”

She kept her face stony while he spoke.

Never, in three years of constant running, had she ever spilled a single secret that she’d been privy to. Never once had she given her pursuers any reason to think her a traitor. Even as they tried to kill her, she had remained faithful. And that hadn’t mattered to her department, not at all.

He waited, clearly hoping she would speak, hoping she would ask something, betray some sign of interest. She just stared at him politely, the way someone would look at the stranger ringing her up at a register.

He sighed and then leaned in, suddenly intent. “We have a problem. We need the kind of answers only you can give us. We don’t have anyone else who can do this job. And we can’t screw this one up.”

“I know you better than that, Juliana. You care about the innocents.”

“I used to. You could say that part of me was murdered.”

She couldn’t help but be impressed he was admitting all of it. No denials, no excuses. None of the It was just an unfortunate accident at the lab kind of thing she had been expecting. No It wasn’t us; it was enemies of the state. No stories, just acknowledgment.

“And now everyone is sorry.” His voice dropped and she had to listen hard to make out his words. “Because we don’t have you, and people are going to die, Juliana. Thousands of people. Hundreds of thousands.”

He waited this time while she thought it over.

She spoke quietly too, now, but made sure there was no interest or emotion in her voice. “We’re talking about the bad stuff here, yes?”

Nothing worked the department up like terrorism. She’d been recruited before the emotional dust had entirely settled around the hole where the Twin Towers used to stand. Preventing terrorism had always been the main component of her job—the best justification for it. The threat of terrorism had also been manipulated, turned and twisted, till by the end she’d lost a lot of faith in the idea that she was actually doing the work of a patriot.

“And a large device,” she said, not a question. The biggest bogeyman was always this—that at some point, someone who truly hated the United States would get his or her hands on something nuclear. That was the dark shadow that hid her profession from the eyes of the world, that made her so indispensable, no matter how much Joe Citizen wanted to think she didn’t exist.

And it had happened—more than once. People like her had kept those situations from turning into massive human tragedies. It was a trade-off. Small-scale horror versus wholesale slaughter.

Carston shook his head and suddenly his pale eyes were haunted. She couldn’t help but shudder a little internally as she realized it was door number two. There were only ever two fears that big.

It’s biological. She didn’t say the words out loud, just mouthed them.

Carston’s bleak expression was her answer.

She looked down for a moment, sorting through all of his responses and reducing them to two columns, two lists of possibilities in her head. Column one: Carston was a talented liar who was saying things he thought would motivate her to visit a place where people were better prepared to dispose of Juliana Fortis forever. He was thinking quickly on his feet, pushing her most sensitive buttons.

Column two: Someone had a biological weapon of mass destruction, and the powers that be didn’t know where it was or when it would be used.

Vanity carried some weight, shifting the balance slightly. She knew she was good. It was true that they probably hadn’t found someone better.

Still, she would put her money on column one.

“Jules, I don’t want you dead,” he said quietly, guessing her train of thought. “I wouldn’t have contacted you if that were the case. I wouldn’t want to meet with you. Because I am certain you have at least six ways to kill me on your person right now, and every reason in the world to use one of them.”

“You really think I would come with only six?” she asked.

He frowned nervously for a second, then decided to laugh. “You make my point for me. I don’t have a death wish, Jules. I’m on the level.”

She returned to her light voice. “I would prefer it if you called me Dr. Fortis. I think we’re past the point of nicknames.”

He made a hurt face. “I’m not asking you to forgive me. I should have done more.”

She nodded, though again, she wasn’t agreeing with him, she was just moving the conversation along.

“I am asking you to help me. No, not me. To help the innocent people who are going to die if you don’t.”

“I know, Ju—Doctor. I know. It will be on me. But who’s to blame won’t really matter to them. They’ll be dead.”

She held his gaze. She wouldn’t be the one to blink.

His expression shifted to something darker. “Would you like to hear what it will do to them?”

“It might be too much even for your stomach.”

“I doubt it. But it doesn’t really matter. What might happen is secondary.”

“I’d like to know what is more important than hundreds of thousands of American lives.”

“It’s going to sound horribly selfish, but breathing in and out has sort of trumped everything else for me.”

“You can’t help us if you’re dead,” Carston said bluntly. “The lesson has been learned. This won’t be the last time we’ll need you. We won’t make the same mistake again.”

She hated to buy into this, but the balance was shifting even more. What Carston was saying did make sense. She was certainly no stranger to policy changes. What if it was all true? She could play cold, but Carston knew her well. She would have a difficult time living with a disaster of this magnitude if she thought there was any chance she could have done something. That was how, in the beginning, they’d roped her into possibly the worst profession in the entire world. 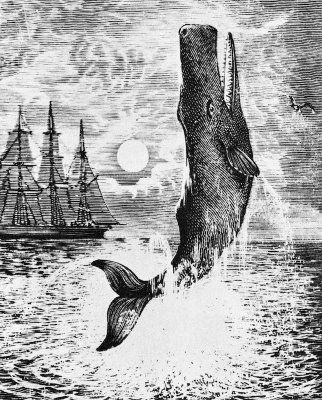 'Moby-Dick' Was Published 165 Years Ago. Dive in Right Here
Next Up: Editor's Pick