How Even a Failed Mars Landing Humanizes Us All

Heartache: ExoMars controllers listen for signals after the lander separates from the orbiter
ESA/P. Shlyaev
By Jeffrey Kluger

Nothing can break your heart like a Mars ship that goes bad. You spend hundreds of millions of dollars, fly tens of millions of miles, get your lander to within a few thousand feet of the surface of the planet and then…nothing. A crash or a blackout or some kind of malfunction and everything is lost.

That was the sudden sorrow experienced by the thousands of engineers, designers and builders of the joint European-Russian ExoMars probe today, when the orbital portion of the two-part spacecraft successfully arrived at Mars and began its two-year mission to sample the planet’s atmosphere, but controllers lost contact with the Schiaparelli lander—named after Italian astronomer Giovanni Schiaparelli—on the way down.

It’s always possible the probe got safely to its intended landing site in Mars’s Meridiani Planum and that the problem is merely a glitchy communications system. That’s certainly the longshot that mission controllers will be investigating before officially declaring the spacecraft dead, but no one is terribly optimistic.

If it’s any consolation to the ExoMars team, it’s that space is hard and Mars has proven itself hardest of all. Since 1960, six different space agencies—from the U.S., Russia, Europe, Japan, India and China—have sent a combined 44 probes to Mars and 25 of them have failed in whole or in part. It’s a mark of the cussedly stubborn human spirit that we keep trying. And it’s a mark too of our refreshingly collaborative nature that more and more, on many matters cosmic, we’re working together.

That was not always the way things were. The original space race was born in the Cold War blood feud between the U.S. and the U.S.S.R. As early as 1967, however, representatives from those countries and others showed their ability to rise above their animus, agreeing to a pact that was formally known as the Declaration of Legal Principles Governing the Activities of States in the Exploration and Use of Outer Space, and was informally known simply as The Space Treaty. Whatever it was called, it committed signatory nations never to militarize space, never to make land claims on the moon or other bodies, and to treat astronauts and cosmonauts as “envoys of mankind” and render all assistance when any of them were in peril.

It was surely just a tragic coincidence that the diplomatic gathering marking the agreement was held at the White House on the evening of January 27, 1967, and that even as the dignitaries were toasting their achievement, three of those space envoys—Gus Grissom, Ed White and Roger Chaffee—were dying in a launchpad fire in their Apollo 1 spacecraft. The very next day, Soviet Ambassador Anatoly Dobrynin, an implacable soldier in the Cold War, but a man who also loved all things space, sent President Lyndon Johnson a personal letter of sorrow:

“Please, accept, Mr. President, my deepest sympathy in the loss of the three valiant men,” he wrote. “The three astronauts, without doubt, could have made a new contribution to the peaceful exploration of the outer space new vistas to which were opened by the space Treaty signed yesterday.” The syntax was a mess, the English was fractured and the stray commas were everywhere, which was all as sure a sign as any that the note came straight from the ambassador’s own typewriter—and heart—and not from the Soviet protocol shop.

Thing have been like that ever since: with the global vigil for the imperiled Apollo 13 astronauts and the global mourning for the lost crews of the shuttles Challenger and Columbia, as well as for the Soviet cosmonauts lost on Soyuz 1 and Soyuz 11 in 1967 and 1971. And things are much more happily that way now aboard the International Space Station, built, flown and maintained by 15 partner nations.

Money, admittedly, plays a role in all this cosmic kumbaya. Space is expensive, and collaborations like the ExoMars project help countries share both the budgetary pain and scientific bounty. They can even help a smart country turn a nice profit. Russia has been happy to fly NASA astronauts to the space station aboard its Soyuz spacecraft since 2011 when we mothballed the last shuttle—but at a cool $71 million a seat, up from $40 million five years ago when the Soyuz became the only ride in town. Of course, we did always say we wanted them to be capitalists; did we think they wouldn’t discover supply and demand?

The larger point, however, is the shared humanity of the entire enterprise. If space is hard and expensive, it’s also scary as hell—deep and deadly and exceedingly mysterious. I don’t care how tough you think you are, if you’re walking through the woods on a very dark night with three of your worst enemies, you’re going to huddle up close when the wolves begin to howl. So we go to space boldly, but holding hands. That might, to a cynic, make us look timid, but it makes us feel sweetly human. 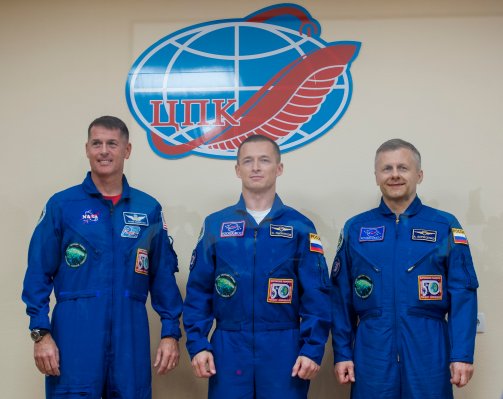 Watch Live: Launch of the Latest ISS Crew
Next Up: Editor's Pick