Jessica Bennett is a contributing editor at The New York Times and the author of Feminist Fight Club: An Office Survivial Manual for a Sexist Workplace

Let’s take a moment to remember back to 2009, the MTV Video Music Awards, when an outraged Kanye West jumped onto the stage and grabbed the microphone from Taylor Swift. “Imma let you finish,” he proclaimed. “But Beyoncé had one of the best videos of all time!” It was, at the time, the most public example of a “manterruption”—that is, a man interrupting a woman while she’s trying to speak—until of course this election season, when Donald Trump stole the manterruption crown.

On stage in the first debate against Hillary Clinton, Trump interrupted the former Secretary of State and host Lester Holt 55 times. She interrupted them 11 times.

Trump is an extreme case—in countless ways—and yet to many women, his behavior was all-too-familiar. We speak up, only to have a male colleague chime in more forcefully. We put forth an idea, only to be interrupted before we can get it out of our mouths. No, we’re not imagining it: there is research to prove that when it comes to work, women speak less, are interrupted more and have their ideas more harshly scrutinized. And it’s not only men who do the interrupting: women are twice as likely to be interrupted both men and women—and they’re interrupted even more frequently if they’re a woman of color.

So how do you stop a manterrupter? Here are 10 battle tactics for fighting casual manterrupters that women, men and even bosses can employ.

Yes, that’s the verbal equivalent of two cars racing at each other at top speed until one of them (his) swerves. Your job is to employ the Clinton strategy of staying strong and keeping talking. Try not to pause to let him get a word in. Keep your momentum going. Whether he raises his voice, waves his hands or hovers behind you, just keep going.

Sure, you can call out a Manterrupter: “Hey DON, I wasn’t done finishing that point. Give me one more sec.” But more effective may be to employ somebody else to do the interrupting for you. Think of it like Beyonce walking up on stage and grabbing the mic away from Kanye. She may have indeed had one of the best videos of all time, but that’s beside the point: she would be interrupting the manterrupter on behalf of her fellow woman, Taylor. How can you employ this tactic? If you hear a woman being cut off, interject: “Hey can you let her finish?” If you can tell a woman can’t get a word in, jump in and ask her to contribute. “Jess, I’m curious what you think?” She gets to speak—without being perceived as “too sensitive”—and you look like an awesome coworker.

‘Amplify’ is a term employed by the women of the Obama White House, who said they invite each other to meetings to increase the female ranks, and then repeat one another’s ideas for “amplification”—directing credit back to their author. Take an oath to back up other women in meetings, whether you are male or female. With this method, not only are they less likely to be interrupted, but they’re also more likely to get credit for their ideas.

There’s at least one bit of research to show that men are more likely to lean in—physically, that is—during seated meetings. And, guess what? Leaning in can actually make you less likely to be interrupted. If you’re not actually seated at a table, there are other ways to assert your physical space that may have the same payoff: pointing while you speak, standing up, placing your hand on the table and making eye contact. Not only do these high-power poses make you appear more authoritative, but they may actually increase your testosterone levels—and thus, your confidence. Bonus tip: men often arrive at meetings early in order to get a good seat. It’s not a bad idea, in general, to place yourself in the closest physical proximity to where the important conversations are being held or decisions are being made.

It’s pretty hard for someone to interrupt you while you’re speaking if you’re speaking with such authority that your audience is enraptured by what you’re saying. A starting place? Speak like you know what you’re talking about, even if you have to fake it—no ums, sorrys or “I’m not sure if this is right, but”—allowed. Use words that signify ownership of your ideas (“I’d suggest”) instead of calling attention to whether or not that idea will (“I wonder what would happen if we tried”). And please, whatever you do, don’t apologize before you speak. That is unless you’re actually sorry.

This one’s for bosses! If you’re in a position of power: establish a no interrrupting rule. As a policy, those in your meetings do not interrupt while people are speaking or pitching, and those who do so will be shamed. Think of it like that elementary school trick of passing around a “talking stick.” Only this time, your stick is a whiteboard marker.

7. Notice How Much You’re Talking

As early as middle school, boys are eight times as likely as girls to call out answers in classroom discussions, while girls are taught to raise their hands and “wait their turn.” This dynamic plays out in film and on television too, where it is the male actors who engage in more disruptive speech – and take up twice as much speaking and screen time as their female peers. It’s worth noting that this behavior may not always be malicious, or even conscious. It is learned – and perpetuated by culture. So, if you are a man, and you have a tendency to talk, try to notice if your female colleagues are having trouble speaking up, or getting a word in, and give them a chance to speak up. And if you’re a woman, check your behavior, too: Are you interrupting your female colleagues just as much as the men?

One way to ensure that women are heard is to increase their numbers in the room: research has found that when women make up more than a quarter of an audience, they feel more comfortable speaking up—the point of “critical mass” where what they say is not simply viewed as the perspective of the woman, but the perspective of a person with an idea. And it’s not just that women will feel more comfortable speaking up; research has also found that what they say will be heard. In one study, researchers looked at the employees of a credit union where women made up 74% of supervisors and 84% of front-line employees. Shocker: women here were more likely to speak up, and be heard. So start small: by supporting other women, backing up their ideas, and trying to improve the ratio of women to men in a room.

You know that trope about how women are the “chatty” ones? It’s actually not true. In male-dominated groups like legislatures, research has found that it’s actually men who talk more than women: 75% more. President Obama has made a point of calling on the women in meetings—why can’t you?

The more women in your office, the more women speak up. And the more women speak up, the better off we all are—women, men and businesses. Research shows that companies with more women on their boards have more female executives; in countries with female heads of state, nearly a quarter more women tend to be appointed to cabinets; and more female CEOs or chairs means women in leadership, better paid female leaders, and female employees—at both the junior and senior level—who feel more supported. So make the business case for female leadership, which might just begin with shutting up when another woman is speaking. 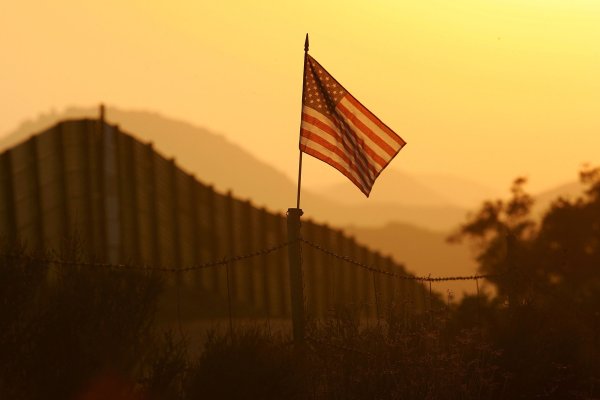 Please Understand Just How Harmful Donald Trump’s Wall Would Be
Next Up: Editor's Pick