Violence Erupts Over 'Caterpillar Tax' in the Democratic Republic of Congo

A person eats grilled caterpillars with olive oil on July 9, 2014 in a makeshift restaurant in the Lingwala district of Kinshasa.
JUNIOR D. KANNAH—AFP/Getty Images
By Tekendra Parmar

At least 16 people have been killed after a row over an illegal levy on the sale of caterpillars in the Democratic Republic of Congo.

According to the BBC, days of violence erupted in the Congo’s Katanga province, when Batwa people , also known as pygmies, accused the Luba ethnic group of levying an illegal tax and beating up caterpillar vendors.

Caterpillars, which are often smoked and eaten with sauce, are a delicacy in the Democratic Republic of Congo, and the caterpillar controversy has exposed fresh wounds in a long-standing feud between the Batwa and the Luba.

Clashes between the two communities have killed hundreds in the past three years, the BBC says. During the most recent attack, the Batwa reportedly killed several members of the Luba ethnic group, with the Luba then launching a revenge attack that killed at least 13 Batwa.

The Batwa have long felt marginalized in the Democratic Republic of Congo, with unequal access to resources or education, turning to violence when they perceive their main source of income as being subjected to an unfair tax. 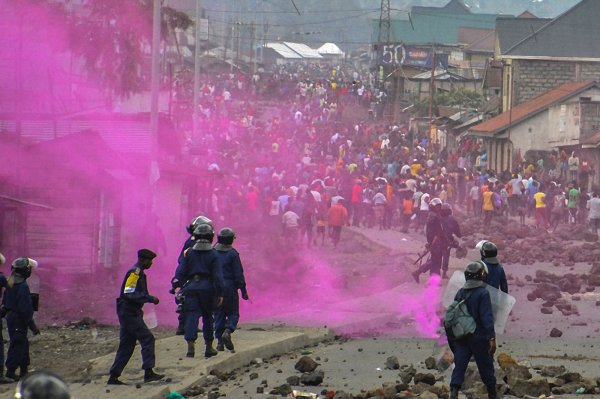 Families of U.S. Personnel in Democratic Republic of Congo Ordered to Leave Amid Unrest
Next Up: Editor's Pick