Why This Presidential Debate Is Donald Trump's Last Stand

This is it for Donald Trump.

The final presidential debate, which began Wednesday night in Las Vegas, is the last big set piece of the 2016 election, and perhaps the last chance for the Republican nominee to muscle his way back into an increasingly lopsided race.

It will be an uphill battle. Trump’s poor campaign performances, and a rash of recent allegations that he made unwanted sexual advances toward women in the past, have sent the billionaire businessman plummeting in the polls. With three weeks until Election Day, he now trails by an average of seven percentage points in national surveys. The battleground map looks little better. Most Republican and Democratic strategists alike now believe that Hillary Clinton is coasting toward victory. Sensing a decisive advantage, Clinton advisers are making a play to run up the score, contesting traditionally Republican states like Arizona and funneling resources into Senate contests in Indiana and Missouri.

Trump has responded to his slump in the polls by lobbing a fusillade of attacks against American democracy itself. For more than a week now, the centerpiece of his stump speeches has been the claim that the race is being “rigged” by a vast conspiracy that includes the Clintons, global elites and their minions in the media. Trump has charged Republican leaders of disloyalty and attempted to sow doubts about the integrity of election results. It’s a strategy designed to energize his core right-wing supporters. And while some advisers believe the GOP nominee stands to benefit from depressed turnout, all this ugliness is doing little to persuade swing voters.

Trump faces a important tactical decision: use his largest remaining audience before Nov. 8 to amplify this “rigged election” argument, or seize the moment to make a sober case that he is prepared to be president. There are signs that Trump may be preparing to shift gears. He announced Tuesday that he would push for a constitutional amendment to impose term limits on members of Congress, part of what his campaign called a “pledge to drain the swamp in Washington.” And he released a new 30-second ad, titled “Change,” that casts Clinton as a D.C. institution beholden to special interests. These are some of the themes that helped Trump rampage through the Republican primaries as a conquering outsider.

Clinton has different challenges. Since the last debate in St. Louis on Oct. 9, her campaign has been forced to weather the steady drip of new internal emails, hacked from the account of campaign chairman John Podesta and released by Wikileaks. The emails haven’t contained a smoking gun that validates Trump’s charge that she is “corrupt.” But they have embarrassed the campaign by offering a peek at the political sausage-making process—internal debates over policy, obsessively scripted messaging, excerpts of private speeches that shade her public positions—which some voters consider unseemly.

The job of putting Clinton on the spot falls not only to Trump but also moderator Chris Wallace. The Fox News host selected the six topics to be covered in the 90-minute debate: debt and entitlements; immigration; the economy; the Supreme Court; foreign hot spots; and “fitness to be President.”

In her first debate with Trump, Clinton succesfully provoked her opponent into a series of damaging stumbles. In their second, his wild haymakers put her on the defensive, even if polls showed that most voters deemed her the winner. Clinton has been trying to run out the clock, avoiding the kind of damaging mistakes that could upend her increasingly comfortable lead. The Las Vegas debate will be one of her last big hurdles in that effort. If she is to win the landmark victory her aides now have in their sights, she will be under pressure to make a positive and uplifting closing argument, not just sit back as her opponent self-immolates.

As close as Clinton is to making history, it’s her challenger who has stolen the spotlight. The last few weeks have been a low ebb in the annals of American democracy. Trump’s claims of election-rigging have challenged some of our cherished ideals, from faith in the integrity of our voting process to the peaceful transition of power. He has an opportunity to reverse course beginning Wednesday night. Trump has certainly shown a capacity to surprise. But if the 2016 election has taught us anything, it’s to prepare for more fear and loathing in Las Vegas. 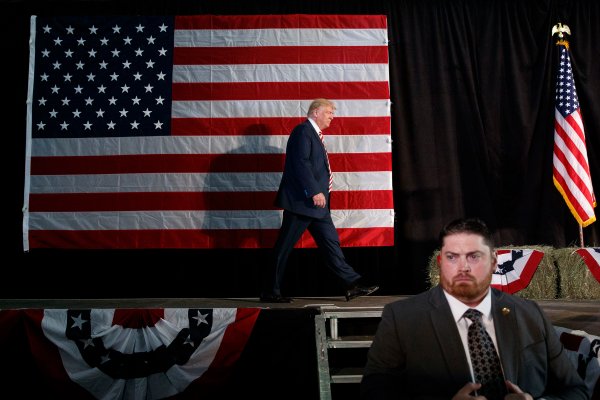