Gabrielle Union on Sexual Assault, Raising Black Sons and Her Move to Chicago

Gabrielle Union attends the premiere of "The Birth of a Nation" on September 21, 2016 in Hollywood, California.
Jason LaVeris—FilmMagic/Getty Images
Ideas
By Eliza Berman
Eliza Berman is a Senior Editor at TIME.

In The Birth of a Nation, Gabrielle Union’s work as an actor and activist merge as she silently, almost unrecognizably, portrays a slave who is also a victim of rape by a white man. Union, who was raped at gunpoint when she was 19, has long been an advocate on behalf of survivors of sexual assault. She has served on the National Advisory Committee for Violence Against Women and lobbied for funding for rape crisis centers around the country. And she has made the most of a publicity tour—for a movie in which she speaks no lines and has rather little screen time—to raise more awareness still for the causes close to her heart.

Her message ran the risk of getting muddled after the movie, released Oct. 7, became mired in controversy when reports resurfaced that Nate Parker, its director, writer, producer and star, had been charged with, and then acquitted of, raping a classmate while in college. But Union has remained remarkably candid, refusing to shy away from difficult questions and compassionately acknowledging those who choose not to see the film. During a break from filming the fourth season of her BET show Being Mary Jane, Union talked to TIME about the personal experience she brought to her latest role, raising black stepsons and keeping her cheering in check when she watches her husband, Miami Heat-cum-Chicago Bulls star Dwyane Wade, on the court.

TIME: Esther, your character in The Birth of a Nation, doesn’t have any lines, but you convey her suffering so powerfully.

Gabrielle Union: I’ve been asked, “Should you separate the art from the artist?” I’ve implored people to not separate my art from this artist because that’s my life. Unfortunately, life gave me all the preparation I needed. Much of my journey as a rape survivor has been in the shadows. The post-traumatic stress is like being locked in this excruciatingly joyless place. People are looking at you, you’re moving through the world, but people don’t really get it. I hope people see Gabrielle Union, rape survivor, as the same person as Esther, because we are the same. As an actor, we’re line counters. You want to have as many lines as possible. But in this particular case, I thought it was much more powerful to really convey the silent, isolating anguish that we go through as survivors.

There are several allusions to female characters, including yours, being raped by white men, but those scenes aren’t shown on-camera. Were you a part of the discussion about whether to explicitly depict those attacks in the movie?

I wasn’t. I actually went into the project thinking we were shooting those. Unfortunately, because I was filming Being Mary Jane at the exact same time—sometimes in the same day I’d have to leave the Mary Jane set in Atlanta, fly to Savannah—time became our biggest adversary. So the night in question, it was my understanding we literally just ran out of time. I don’t know about Cherry’s [Aja Naomi King’s] scene. But mine was definitely written. [A representative for Union emailed TIME after the interview to say that after further consideration, Union wasn’t sure if the rape scene had been included in the original script.]

With women speaking out against Bill Cosby and Roger Ailes (who have been accused of sexual assault and harassment, respectively), does it feel like there’s been a cultural shift?

Women have been coming forward for years, and we just haven’t been believed. Now we have so many more avenues to get our stories out. But sexual harassment in the workplace is as old as time. We were just discouraged from coming forward. We’re still discouraged, as you can see—“Well, if you waited this long, it’s not true, it’s not real, it’s part of a wide-ranging conspiracy.” There’s a reason sexual assault is the most underreported crime in the world. I’m sure Anita Hill is like, “Damn it, I’ve been telling you!”

What was your reaction to Donald Trump’s Access Hollywood tapes?

It’s infuriating that the tapes were sat on for 11 years. Trump has been in charge of thousands of employees for decades, and the fact that no one felt the need to protect half his workforce, I find unconscionable. I don’t understand—there’s just been so much proof of terrible, crazy, erratic, racist, bigoted, sexist behavior—that someone found it reasonable to sit on it. I guess they thought the success of The Apprentice was more important than protecting women.

You’ve talked about fearing for the safety of your stepsons in a society that criminalizes black skin.

For them, it’s terrifying. They go to school and it’s reinforced: the police are your friends, if you just pull your pants up and use correct English. Then life slaps them in the face and says, No, there’s no way to price yourself out of racism. They’re like, “But it’s unfair.” And what do you say to your kids when the answer is, “You’re absolutely correct”? It sucks to have to tell your kids that it’s not enough to be an upstanding citizen and do everything that a police officer is telling you. We’re not giving our kids logical answers because there is no logical answer. The fear is based on the amount of melanin that they have.

Is it true that your husband Dwyane Wade banned you from sitting courtside because of your colorful commentary?

It was a joke that has taken on a life of its own. I’ve actually never sat courtside. He’s never banned me. A lot of times, I’m yelling what he’s thinking. I think he’s more frustrated that the referees are actually paying attention to me instead of the game. But now that we’re in Chicago, these people don’t know us well. My goal is to be a little more reserved. Granted, the season hasn’t started so get back to me after the first week and I’ll let you know how that worked out.

What gets you riled up more, your husband’s basketball games or your alma mater’s football games?

Oh, Cornhusker football, easily. It’s not even close. But now he’s joined me in the love of all things Nebraska football, so we’re both psychotic together.

With your breach of contract lawsuit against BET pending, are you concerned for the future of your show, Being Mary Jane?

I go to work every day, professional as ever. I believe in the show more than ever. We just have some business stuff to work out that’s fair and equitable to everybody. Not just to me but to the rest of the cast, the writers, the crew. The show is going to continue and it’s actually really, really juicy. I can’t wait for people to see what we’ve been working on.

You’ve been spending more time in the writers’ room on the show. Are you interested in getting into writing?

I’ve been interested in short stories and maybe writing a book. I don’t know if writing scripts is in my future, but I love being in the writers’ room. I love being around creative people, and the fact that I was even invited in was just huge. I don’t think I’ve been that nervous about meeting a group of people in a really long time. I went in and talked to them about some of my strengths, some of my weaknesses, where I’d like to see the show go, what I’d like for the character. I shared some of my crazy stories from my youth that could be used for Mary Jane or some of the other cast members. It was really nice to be heard and it felt very collaborative.

What are you reading these days?

The last book I finished was called The Luckiest Girl Alive by Jessica Knoll. If you like Gone Girl, you’ll love this one. And I just started this book called Rich and Pretty, by Rumaan Alam, that someone gave me on a plane. This woman was reading it. I loved her outfit. I generally don’t take book suggestions based on someone’s outfit, but it was so fly, I was like, this woman’s onto something. I loved A Little Life—I think me and the rest of the world who read it is obsessed with that book. It’s everything.

Are there projects you’re interested in developing as a producer?

I’m always on the lookout. Usually someone like Lupita [Nyong’o] has beaten me to the punch. Literally the last two things I called about, they’re like, “Lupita got it.” But great minds think alike.

You’ve been in this business for 20 years. What are your hopes for the next 20?

To redefine “bombshell” in my 60s. Helen Mirren beat me to it, but I want to be 65, smoking a hookah with a crop top on, traveling the world, redefining what it is to be a valued voice as a black woman, as an older woman. There are so many dope women that are blazing a number of trails ahead of me, I don’t think it’s going to be as hard as I’m making it sound. I’m over 40 and I’ve never had this many opportunities. What’s next?  And who can I bring with me? It’s not enough for me to be there. I want everyone to be in the room with me. 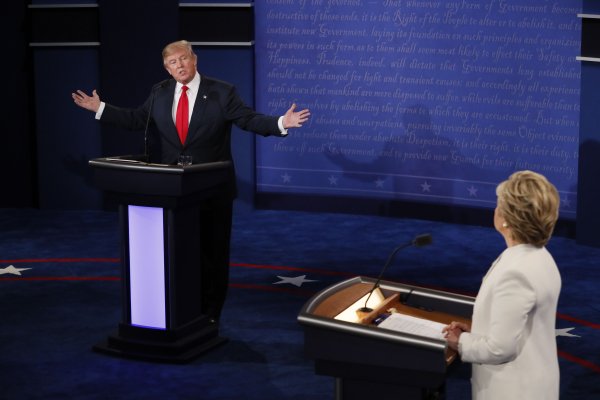