British journalist and editor Jemima Goldsmith’s costume featuring a groping Donald Trump is up for sale on eBay, and the proceeds will benefit Syrian refugees.

Goldsmith (also known as Jemima Khan) dressed as Melania Trump being groped by her husband, a plastic Donald Trump, for the UNICEF Halloween Ball 2016.

Now the controversial costume, dubbed “Original Trump Groper Halloween Costume,” is up for auction online, described on eBay as “easy to wear, [with] straps on either side like a backpack in order to wear Donald on your back.” As of Tuesday, the costume had received six bids and was up to £122. The money raised is going to Muslim Syrian refugees via UNICEF as “that’s what The Donald would want,” the eBay post said.

The Republican candidate has come under fire after a 2005 video was released showing him bragging that he can grope women because he’s a celebrity, comments Trump dismissed as “locker room talk.” Since then, several women have come forward to say Trump groped or kissed them without his consent. Trump denies the allegations. 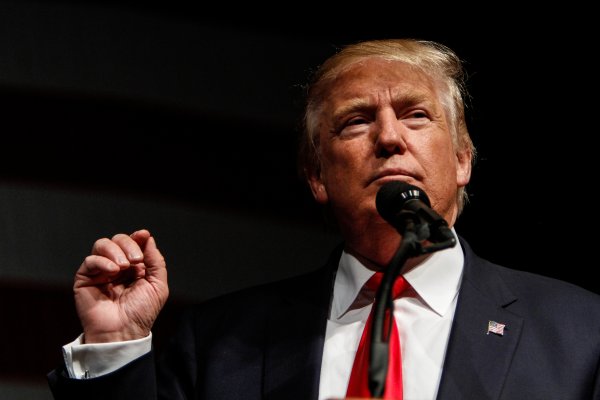 Former People Reporter Who Accused Donald Trump of Assault: 'We Cannot Be Silent Anymore'
Next Up: Editor's Pick