At a rally in Wisconsin Monday night, Donald Trump unveiled a new ethics plan to reform the relationship between the government and the lobbying industry.

In a statement, Trump said his proposals would “drain the swamp in Washington, D.C.” and “make our government honest once again.” But he isn’t the first presidential candidate to propose or attempt these changes. Here’s how Trump’s plan stacks up to what Hillary Clinton has supported this election season and what President Barack Obama implemented in office.

Trump: Trump would institute a 5-year ban on administration officials lobbying the government after they leave their jobs. He would also ask Congress to institute its own 5-year lobbying ban on former congressmen and congressional staff.

Clinton: In 2015, Clinton said she supported a bill introduced by Wisconsin Sen. Tammy Baldwin that would prevent people leaving government service from taking a job for two years at a company they oversaw.

Obama: When he took office, Obama issued an executive order barring any of his political appointees from working for an agency they had lobbied within the past two years. (Obama took flak, however, for issuing multiple exceptions to this rule.) During his first campaign, Obama also said that no political appointee who left the government would be allowed to lobby the executive branch during the remainder of his administration.

Trump: Trump says he would “expand the definition of lobbyist” so former government officials who have titles like “consultant” or “advisor,” but are lobbyists in practice, will still be subject to these rules.

Clinton: The measure Clinton supports would also close this loophole. In an op-ed, Clinton and Baldwin wrote that the bill would “clamp down” on people working under different titles to try to “avoid legal requirements that lobbyists have to meet.”

Obama: Obama’s rules only apply to registered lobbyists. “The law defined the term ‘lobbyist,’ and it made sense to start there,” former White House counsel Robert Bauer, who helped draft Obama’s executive order on this issue, told the Washington Post last year. Federal law requires people to register as lobbyists if they spent 20% of their time lobbying, leaving potential leeway for those who do not officially register or work under a different title. “There’s a whole cadre of folks who are not required to register under [Lobbying Disclosure Act] and yet who are purveying special interest influence,” Norm Eisen, White House head of ethics from 2009 to 2011, told the Post. “The influence industry has grown since the executive order was signed, so the new president is going to need to figure out a way to address that.”

Trump: Trump’s campaign has not taken any money from registered lobbyists, the Washington Post reports, or at least has not taken more than $17,600 from lobbyist bundlers, at which point they would have had to disclose names. Avoiding donor influence has been a central pledge of Trump’s campaign. (He does, however, have various lobbyists as advisers to his campaign, especially in relation to energy policy.)

Clinton: Lobbyists have raised about $7 million for Clinton’s 2016 campaign so far, the Washington Post reports. On a different side of the money issue, the legislation Clinton supports would prohibit “golden parachutes,” or bonuses for private sector employees who take government jobs.

Obama: In 2008, Obama pledged as a candidate not to take money from registered lobbyists. As president, he banned registered lobbyists or lobbying firms from giving gifts to executive branch employees. The super PAC supporting his re-election, as well as congressional and gubernatorial campaign committees, however, have taken the cash.

Trump: Two of the five bullet points in Trump’s ethics plan concern the influence of foreign governments in the American system, an issue Trump’s campaign has run into trouble with. (Trump’s former campaign chairman, Paul Manafort, resigned this summer amid controversies surrounding his relationship with Russian-backed politicians in Ukraine, and he worked as a longtime lobbyist for multiple foreign regimes.) Under Trump’s proposed plan, there would be a lifetime ban on senior executive branch officials lobbying on behalf of a foreign government. He would also ask Congress to pass campaign finance legislation that would prevent American lobbyists who work for foreign clients from raising money in American elections.

Clinton: A recent batch of Clinton campaign emails released by Wikileaks showed aides in 2015 agreeing to accept money from U.S. lobbyists working on behalf of foreign governments. Campaign manager Robby Mook wrote that he was “ok just taking the money and dealing with any attacks,” and campaign spokeswoman Jennifer Palmieri wrote, “Take the money!!”

Obama: The president’s revolving door executive action did not include provisions specifically about foreign interests.

With additional reporting by Sam Frizell and Philip Elliott 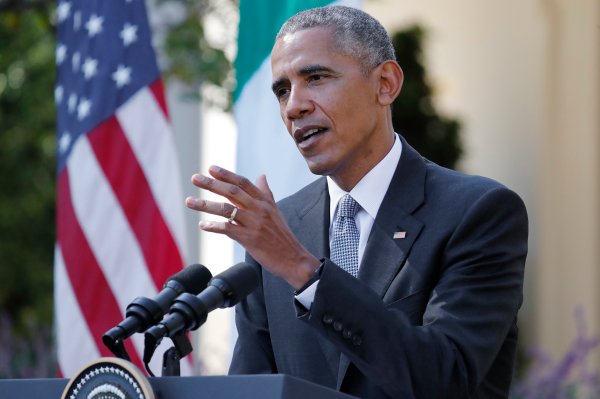