The Royal Thai Police stand guard waiting for members of the royal family to arrive outside the Grand Palace on Oct. 16, 2016, in Bangkok
Paula Bronstein—Getty Images
By Joseph Hincks

Last Friday in Bangkok, the day after King Bhumibol Adulyadej’s death, Thais wore black, electronic billboards were switched off, and people cried openly in the streets.

The country’s ninth monarch was much loved abroad and in Thailand, where his framed image hangs in many homes and businesses.

Thailand may have garnered a reputation as a backpacker haven, but it is governed by strict social protocols. Respect shown by tourists is usually reciprocated in kind. As the country enters a yearlong mourning period, this is especially true.

On Friday the Tourism Authority of Thailand (TAT) issued a list of recommendations for visitors, and the British, Australian and other legations have advised their citizens on appropriate behavior — check with your embassy. Local expat publications have also drawn up lists. But here are guidelines in a nutshell.

One of the most striking images to have come out of Thailand in recent days features a convoy of vehicles carrying the body of the late King across the Pin Klao Bridge en route to the Grand Palace. The motorcade is flanked by a tide of black-clad mourners.

On Saturday, Thailand’s Bangkok Post reported that the demand for black clothing had caused some shops to sell out.

Some Thais not wearing black have been publicly shamed. Although government spokesman Lieut. General Sansern Kaewkamnerd recently cautioned against such reprimands, these instances reflect the mood among some Thais.

Civil servants have been ordered to wear black for a year, and Thai citizens urged to for a month.

Although there is no legal requirement for foreigners to wear black, visitors should not offend locals with colorful, eye-catching dress. The U.K. Foreign Office suggests tourists should “wear somber and respectful clothing when in public; check local media regularly and follow the advice of the local authorities.”

On Friday BBC journalist John Sudworth, who was in Thailand, said that swimsuits should still be acceptable in the big resort beaches.

Across the country, TV shows, entertainment and sports events are being toned down, and the government has asked people to avoid “joyful events” as a mark of respect.

After the announcement of the King’s death on Thursday evening, the content of all television channels, including that of foreign networks like the BBC, was replaced with government-produced footage eulogizing the King. While most news channels are back on air, they face intense scrutiny over what is broadcast.

Thailand’s newspapers and their corresponding news websites have meanwhile been produced in black and white since the King’s death.

The country’s rambunctious nightlife will not shut down entirely, but it is likely to be more subdued for a long time.

The clubs and bars of the adult entertainment district Soi Cowboy remain shuttered and silent as the country continues to mourn the loss of its King on Oct. 16, 2016, in Bangkok
Leon Neal—Getty Images

Almario Mungcal, marketing director at Le Méridien, a high-end hotel in the beach resort of Phuket, tells TIME that the hotel has canceled nightly entertainment shows, postponed the launch of its conference center, and given its in-house band a two-week vacation.

On Sunday, the Interior Ministry clarified that private bars and nightclubs could operate normally so long as they were behind closed doors.

Photographer and blogger Willy Thuan, who has lived in Thailand since 1994, said that many Bangkok bars had already reopened and he expects the clubs won’t be far behind.

But large public events and street parties are still way off.

On Monday, Khao Sod English, an online subsidiary of Thai daily Khao Sod, published photographs of tourists queuing for boats out of Ko Pha Ngan after the island’s hedonistic full-moon party was canceled.

According to TAT, tourist attractions will be open as usual with the exception of Wat Phra Kaeo (Temple of the Emerald Buddha) and the Grand Palace, as they will be the venue of the royal funeral rites. There’s a list of bars, restaurants and such open in Bangkok during the mourning period here.

Customers sit and drink at a bar at night in the Silom area of Bangkok on Oct. 15, 2016
Bloomberg/Getty Images

Thailand’s draconian lèse majesté laws — also known as Article 112 — make it a crime to criticize, defame or insult the monarchy. In recent years, academics, politicians, journalists and ordinary Thais have run foul of the law. In 2015 a man was jailed for 30 years over six Facebook posts. One man has even faced almost 40 years in jail for a satirical post about the King’s dog.

Tourists and other foreigners have also fallen foul of this law in the past, including those who were not even living in Thailand at the time they committed an alleged offense.

Engaging in discussions about succession, or anything that may be perceived as critical to the monarchy could land foreigners in serious trouble. The advice of Khao Sod English: “Listen to people but don’t talk about the monarchy.”

Visitors should be aware that lèse majesté cases can be brought by any Thai citizen — no matter what country they reside in, and at any time, against any other individual, Thai or foreign. 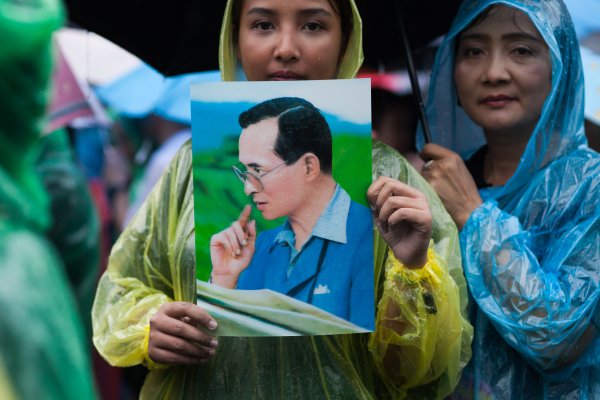 Thai Royal Succession to Be 'Delayed for a Year'
Next Up: Editor's Pick