41% Believe Election Might Be Stolen from Donald Trump, Poll Finds

Though his support is slipping, Republican nominee Donald Trump’s claims that the election could be stolen from him are starting to set in with voters, according to a new poll.

Some 41% of voters surveyed for a new Politico/Morning Consult poll agreed with Trump’s statement that the election could be “stolen” from him as a result of “widespread voter fraud.” Among Republicans, nearly three-fourths of voters agree the election could be rigged against Trump, while only 17% of Democrats were in agreement.

The majority of Americans, 60%, believe it’s “necessary” to raise questions about election results because a foreign government or fraudulent voters could compromise the election.

Both candidates have been pushing the idea that there are agents seeking to interfere with the election. The repeated leaks of hacked emails from Democratic candidates has stoked fears that Russia is seeking to manipulate the election and served as fodder for former Secretary of State Hillary Clinton’s claim that the Trump campaign is in cahoots with the Kremlin.

Meanwhile Trump’s falling poll numbers have encouraged his most fiery rhetoric, including his theory that the Clinton campaign will fix the election in favor of his opponent. “The election is absolutely being rigged by the dishonest and distorted media pushing Crooked Hillary – but also at many polling places – SAD,” Trump tweeted on Sunday.

Though the poll results show that voters are wary of the process, many voters polled said they still believe their own vote will be counted properly when they head to the ballot this election. According to the Politico/Morning Consult poll, 80% of registered voters are either very confident or somewhat confident their own vote will be counted even though 30% of those voters question whether the same will be true for other voters across the country.

1,737 likely voters were surveyed for the poll, which was taken between Oct. 13 and Oct. 15. It has a margin or error of plus or minus two percentage points. 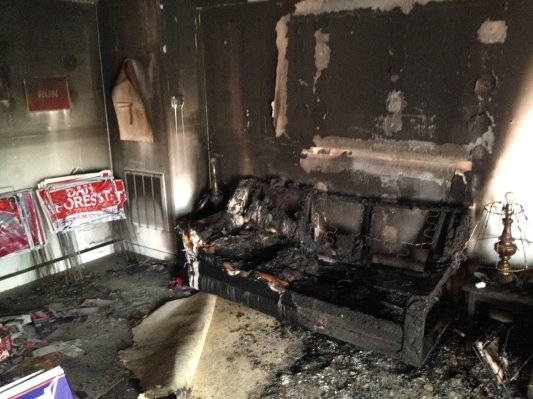 Trump and Clinton Condemn Firebombing of GOP Office
Next Up: Editor's Pick