Donald Trump has ramped up his attacks against the women accusing him of sexual assault, firing back at them personally at a campaign rally without using their names.

Speaking in front of a rowdy crowd in Greensboro, North Carolina, Friday afternoon, Trump said all of the allegations were lies, called one accuser a “horrible woman,” told his followers to look up another on Facebook and said another accuser “would not be my first choice.”

“When you looked at that horrible woman last night, you said, ‘I don’t think so,'” he said about one of his accusers.

The rally was Trump’s most aggressive effort yet to defend himself on the sexual assault allegations that have come out since he denied ever touching women inappropriately at the second presidential debate. He mocked the allegations, calling them lies and, at one point, even mimicking grabbing someone with his hand.

While Trump was speaking, former Apprentice contestant Summer Zervos was holding a press conference in which she said that in 2007 Trump kissed her, groped her and attempted to seduce her during what she thought was a professional dinner meeting.

At the rally, Trump called People magazine reporter Natasha Stoynoff, who claims he forcibly kissed her in 2005 while she was writing an article about him, a liar, and may have implied for the second time that she was not attractive enough for him to try to kiss. (On Thursday, he said of Stoynoff, “Look at her, look at her words, you tell me what you think. I don’t think so.”)

“She is a liar,” he said. “Check out her Facebook page, you’ll understand.”

Read More: Transcript of Donald Trump’s Speech on His Accusers

He also attacked the appearance of Jessica Leeds, who claims Trump groped her on an airplane. “Believe me, she would not be my first choice, that I can tell you,” he said.

He also questioned the most recent allegation, from a woman named Kristin Anderson in the Washington Post today , who says that he put his hand up her skirt at a club, arguing it could not be true because he doesn’t ever go to clubs by himself.

“I was sitting alone in some club? I really don’t sit alone that much, folks,” he said.

Trump categorically denied the allegations against him, arguing alternately that the women were doing so for attention and that they were part of a media conspiracy to bring down his campaign, singling out New York Times shareholder Carlos Slim, who is Mexican, as partly responsible for the coverage.

“They have no witnesses,” he said of the accusers. “There’s nobody around. They just come out. Some are doing it for probably a little fame. They get some free fame.”

Advancing his theory that these accusations are part of a conspiracy against him by journalists and the Clinton campaign, Trump said, “The process is rigged. This whole election is being rigged.” He argued that media coverage is “poisoning the minds of the electorate.”

Still, Trump seemed aware of the damage these stories could do to his campaign. “If 5% of the people think it’s true, maybe even 10%, we don’t win,” he said. But when he polled the audience and asked them if he should be responding to the allegations, he appeared to be secure in his choice. 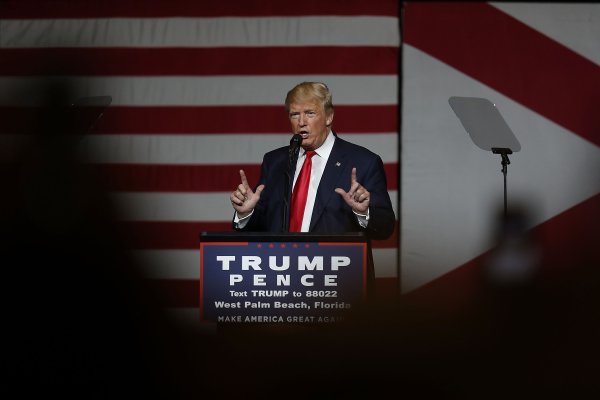