President Obama Blasts Republicans: 'They’ve Been Feeding Their Base All Kinds of Crazy'

President Obama blamed the Republican Party for the rise of Donald Trump, saying that “they’ve been feeding their base all kinds of crazy for years.”

Speaking at an Ohio Democratic fundraiser Thursday night, Obama focused his criticism on a party he sees as fostering extremism and conspiracy theories, theories which the Republican nominee himself espouses. “The problem is, is that they’ve been riding this tiger for a long time,” Obama said of birther-ism and other conspiracy theories, the Washington Post reports. “They’ve been feeding their base all kinds of crazy for years, primarily for political expedience.”

“And Donald Trump, as he’s prone to do, he didn’t build the building himself, but he just slapped his name on it and took credit for it,” Obama continued, saying Republicans have laid the new foundation of their party on “lies” and “hoaxes.” “This is the nominee you get,” he said. “You make him possible.”

The president also criticized the recent spate of Republican leaders who have disavowed Trump after the leaked video of him saying extremely crude things about women. “They know better, a lot of these folks who ran, and they didn’t say anything,” Obama said. “And so they don’t get credit for, at the very last minute, when finally the guy they nominated and they endorsed and they supported is caught on tape saying things that no decent person would even think, much less say, much less brag about, much less laugh about or joke about, much less act on. You can’t wait until that finally happens and then say, ‘That’s too much, that’s enough,’ and think that somehow you are showing any kind of leadership and deserve to be elected to the United States Senate. You don’t get points for that.” 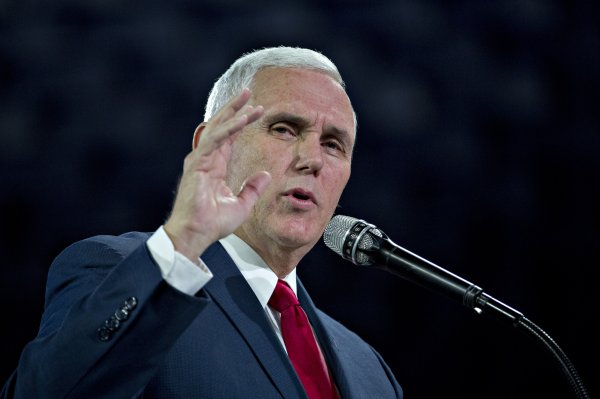 Mike Pence Gave an Odd Answer to a Little Girl's Question About Self Image
Next Up: Editor's Pick