Police officers face off with protesters following the fatal shooting of 43-year-old Keith Lamont Scott by a police officer in Charlotte, NC., on Sept. 21, 2016.
Sean Rayford—Getty Images
By Josh Sanburn

The widow of Keith Lamont Scott, the 43-year-old black man fatally shot by police in Charlotte, N.C., last month, told CBS News that she doesn’t believe the police department’s claims that Brentley Vinson, a black police officer who has been placed on administrative leave, was the one who shot her husband.

“Officer Vinson, I don’t believe, shot my husband,” Rakeyia Scott told CBS This Morning. “I did see him, but he was at a distance. He’s not a part of the interaction.”

Scott was killed during a confrontation with Charlotte-Mecklenburg Police Department officers after officers say they saw him rolling marijuana and carrying a gun inside his vehicle. Rakeyia Scott recorded much of the confrontation on her phone, in which officers can be heard telling her husband to “drop the gun.” Rakeyia Scott can also be heard telling officers that Scott had a traumatic brain injury and had just taken his medication. Scott claims her husband was not carrying a gun at the time, but officers say they recovered a gun and an ankle holster at the scene.

Scott said in the CBS interview Thursday that she believes one of the other officers at the scene shot her husband, and that race played a role in the shooting.

On Wednesday, the family released results from an independent autopsy showing Scott had four gunshot wounds, including one each in the back and abdomen. The family requested the private autopsy, which was performed Sept. 30, after Scott’s death on Sept. 20 led to violent protests in Charlotte. The death was ruled a homicide by the forensic pathologist who performed the autopsy.

“We believe the first shot fired was the shot that struck Keith in the back and ultimately killed him,” Charles Monnett, the family’s lawyer, said in a statement.

CMPD Lt. David Robinson said on Thursday that the department “won’t be making any further statements regarding this case.” 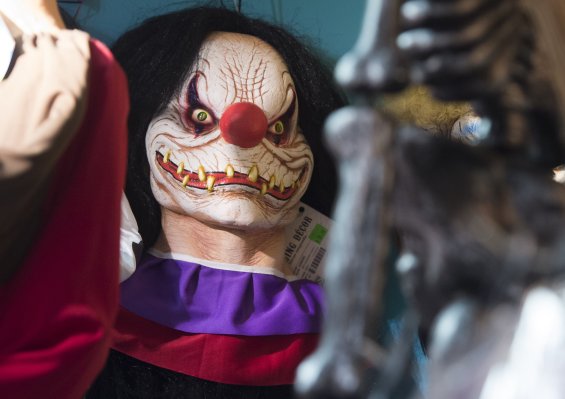 The 'Clown Lives Matter' March Is Cancelled, Organizer Says
Next Up: Editor's Pick