News that a major British supermarket will no longer be stocking Marmite following Brexit has sparked outrage across the U.K., leading the hashtag #MarmiteGate to trend on Twitter.

Tesco pulled a range of products, including Marmite, PG Tips tea bags, Ben & Jerry’s ice cream, Persil washing powder and Lynx body spray, from its website after a row over pricing with the major food and household goods supplier Unilever.

According to The Guardian, Unilever is trying to charge Tesco an extra 10% for its goods due to the pound’s fall against the euro and the dollar following the vote for Brexit in June. Graeme Pitkethly, Unilever’s chief financial officer, described these price increases as a “normal” part of business. “We are taking price increases in the UK. That is a normal devaluation-led cycle,” he told analysts.

Marmite fans have not taken the news well, packing social media full of photos of shelves being emptied of the “love it or hate it” yeast spread. Tubs of Marmite have even gone on sale on eBay for up to £4million ($4.78 million)—although no bids have been placed so far.

One of the Marmite jars for sale is described as “Rare 2016 genuine retail Marmite jar (unopened).” The product description reads: “One of the last remaining examples of this fabled product in private hands. Unsealed, it is in the same condition it was when it was plucked from the supermarket shelf. Little did I know it would be the last Marmite I ever bought – and now, you, too, can buy your last ever Marmite.” 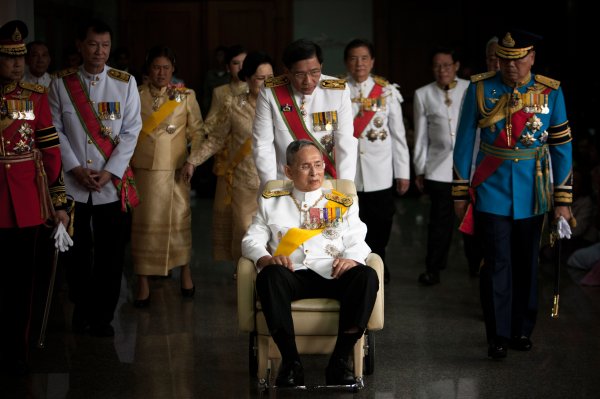 World Leaders and Royalty Mourn the Death of Thai King Bhumibol Adulyadej
Next Up: Editor's Pick