Family members unable to reach their grandmother in Florida after Hurricane Matthew made sure she was safe by ordering a pizza to her house.

Eric Olsen, who lives in Omaha, Nebraska, said he grew worried after being unable to reach Claire Olsen, his 87-year-old grandmother who lives alone in Palm Coast, Florida, for two days after the storm ripped through the area, according to ABC News. When he spoke to her on Friday, she told him she had lost power.

Olsen ordered the pizza from Papa John’s and gave special instructions for the delivery person to call his phone upon getting to his grandmother’s house and give the phone to Claire Olsen so he could speak to her. It worked—to his relief, Olsen heard his grandmother alive and well on the other line.

“Police and fire couldn’t do it, but Papa John’s got there in 30 minutes and put the cellphone to her ear,” he said. “People are asking why I didn’t call the police and ask them to do a wellness check, but I did. Trust me, Papa John’s was a last resort.”

Lance Tyler, the pizza deliveryman, told WFTV that Claire Olsen’s expression “was just priceless” while speaking to her grandson. 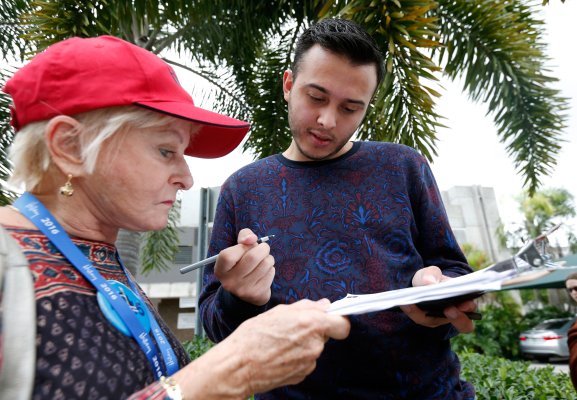