Teen Wears 'Grab My P—y, I Dare You' Shirt To Trump Rally

Supporters of Republican presidential nominee Donald Trump show their support for him before the start of the campaign event for Democratic presidential nominee Hillary Clinton at the Miami Dade College - Kendall Campus, Theodore Gibson Center on October 11, 2016 in Miami, Florida.
Joe Raedle—Getty Images
By Megan Lasher

Trump’s p—y-grabbing comment has echoed across the world in the past week as fellow Republicans (and Aaron Carter) withdrew their support over the crude words. Now, women are twisting the words into a political statement, first with the ‘P—y Grabs Back’ logo and now with this teen’s homemade revolution.

High school senior Anna Lehane wore a shirt that said “Grab my p—y, I dare you,” to a Trump rally in Pennsylvania on Monday. “I made the shirt as a protest to people in the public spotlight on such a global platform making such disrespectful, degrading and misogynistic comments and still being taken seriously,” she told The Huffington Post.

Lehane told the Philadelphia Inquirer that she felt wearing the shirt was her “civil duty,” but it wasn’t appreciated by everyone in the crowd. She said that she was called a Communist, and one man told her he “always likes a good dare.”

She was accompanied by her friends in Black Lives Matter shirts, and of course Trump protesters in misogynistic garb. 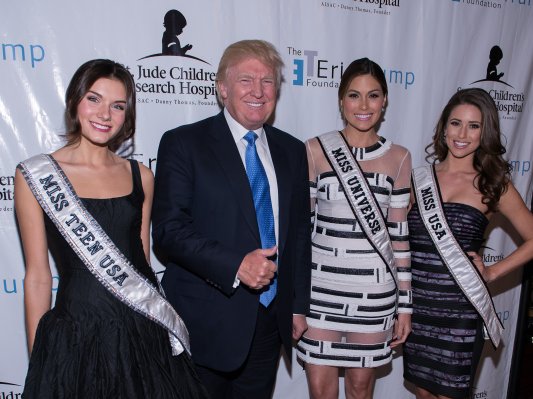