Supreme Court Justice Ruth Bader Ginsburg wants to have eight colleagues on the bench before the end of the court’s current term.

In an interview with journalist Charlie Rose this week, Ginsburg stressed the importance of having nine justices on the Supreme Court, which has had just eight members since Antonin Scalia died in February. Senate Republicans have refused to hold confirmation hearings for President Obama’s nominee, Merrick Garland, arguing that it should be the responsibility of the next president to nominate a new justice.

In the interview, which aired Monday and Tuesday, Rose noted that the next president will now have the opportunity to appoint a new justice.

“That’s one scenario. The other possibility is after the election, the Senate will act,” Ginsburg said, suggesting that the Senate could hold hearings for Garland during the lame-duck session between November’s presidential election and the inauguration on Jan. 20.

Asked what she would like the Senate to do, Ginsburg demurred.

“I would like to see the court have a full house by the time this term ends,” she said. The Supreme Court stops hearing cases in April, convening in May and June only to announce orders and opinions.

The eight justices have been relatively quiet on the subject this year, though Ginsburg has praised Garland and criticized the Senate’s inaction.

Garland has now waited nearly seven months for a confirmation hearing—longer than any other Supreme Court nominee. Before Garland, the Senate had never taken more than 125 days to vote on a nominee, the New York Times reported. Throughout U.S. history, nominees have been confirmed, rejected or withdrawn in an average of 25 days, according to a Times analysis, but the length of time from nomination to confirmation has been longer in recent decades.

If the Senate takes as many days to confirm a new nominee as it took to confirm Justices Elena Kagan (87), Sonia Sotomayor (66) or Samuel Alito Jr. (82), the next president could nominate a justice in January and see them confirmed before the end of the current term—much to Ginsburg’s delight. But that would be an almost speedy turnaround for a legislative body now known for gridlock. And in her interview with Rose, Ginsburg emphasized the court’s need for a ninth justice soon.

“Eight is not a good number for a collegial body that sometimes disagrees,” Ginsburg said.

In instances when the court is divided, an even number of justices makes it difficult for the Supreme Court to issue a binding judgment and resolve conflicts among lower courts, she said.

“What we do is we automatically affirm the decision of the court below. No opinion is written, no reasons are given, and the affirmance has no precedential value,” Ginsburg said. “It’s just as though we denied review.” 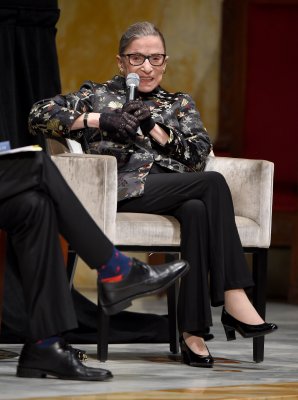