Samsung's Smartphone Recall Is Costing It Billions of Dollars

(SEOUL) – Samsung Electronics Co slashed its quarterly profit estimate by a third on Wednesday, soaking up a $2.3 billion hit from ditching its flagship smartphone in what could be one of the costliest product safety failures in tech history.

Quantifying the financial pain of Tuesday’s move to scrap the Galaxy Note 7 smartphone after a global recall and weeks of mounting problems, the world’s top smartphone maker said it expects its July-September operating profit was 5.2 trillion won ($4.7 billion), down from the 7.8 trillion won it estimated five days ago.

Samsung said in a statement the 2.6 trillion won ($2.3 billion) guidance cut reflects the sales and earning impact it currently expects from the decision to permanently halt sales of the $882 Note 7 device. Its third-quarter revenue estimate was also cut to 47 trillion won from 49 trillion won previously.

The new earnings guidance is 30 percent below third-quarter 2015’s operating profit, and left investors and analysts pondering the longer impact on Samsung’s brand and earnings. Rival suppliers of smartphones that use the Android operating system, like Samsung’s, stand to benefit if the Note 7 damage drive consumers elsewhere.

“It’s possible there could be additional profit impact in the fourth quarter but it likely won’t be as large as the third quarter,” said Park Jung-hoon, a fund manager at HDC Asset Management, which owns shares in Samsung. “I think it’s possible for fourth-quarter profits to come in as much as the high 7 trillion won range.”

Samsung shares ended down 0.7 percent on Wednesday, with the Seoul market closing before the earnings guidance cut was announced.

HDC’s Park said the initial guidance issued last week likely already factored in a 1 trillion won profit impact, putting the total third-quarter earnings hit at around 3.6 trillion won. While this was a major blow, he said some investors had feared the profit impact could be as large as 5 trillion won this year.

Samsung shares have already fallen 10 percent this week and are on track for their biggest weekly decline since May 2012, having touched a one-month low of 1.494 million won as investors worried the Note 7 crisis could inflict long-term damage on Samsung’s reputation and earnings.

Some investors said Samsung may need to return more cash to shareholders, either through a dividend or additional buybacks, to calm market jitters. HDC’s Park said the cash-rich firm may need to announce a buyback of between 2 trillion won and 3 trillion won in order to mollify shareholders whose nerves have been jangled.

The tech giant announced the recall of 2.5 million Note 7s in early September following reports of the phones catching fire. The firm appeared to have the situation under control as it issued replacement devices with different batteries, until new phones also began to smoke and combust.

Investors and analysts agreed that the damage to Samsung’s brand and future earnings would deepen the longer the market was left in the dark about the origin of the fault. Some have already predicted lost revenue in the region of $17 billion for Samsung.

“There needs to be explanation from Samsung in order for consumers to understand that problems won’t occur in the next models…Samsung needs to clearly explain and admit what went wrong,” said IBK Asset Management fund manager Kim Hyun-su. The asset manager owns shares in Samsung.

Samsung would likely push ahead to get the latest version of its premium S-series smartphones to market as soon as possible, fund managers said. Typically, the South Korean company unveils a new Galaxy S phone on the sidelines of the Mobile World Congress tech trade show in the first quarter as it battles Apple Inc to stay at the top of the smartphone market.

Experts are baffled by what could be causing the overheating in the replacement phones, if not the batteries, and Samsung has not commented.

An official at the Korean Agency for Technology and Standards, which is investigating the problem alongside Samsung, said the fault in the replacement devices might not be the same as the problem in the original product. The official asked not to be identified as he was not authorised to speak publicly.

Aviation authorities and airlines around the world are telling passengers to switch off their Note 7s and keep them out of checked baggage, amid fears they could bring down a plane.

“Damage control at Samsung will face an uphill battle to redeem the company’s tarnished image owing to the dangerous and dramatic nature of the phone’s failure,” Vijay Michalik, an analyst at research firm Frost & Sullivan, said.

While the damage to Samsung’s brand, if not its earnings, remains hard to quantify, negative publicity from the botched recall could touch off a turf war among Android smartphone manufacturers, analysts said. 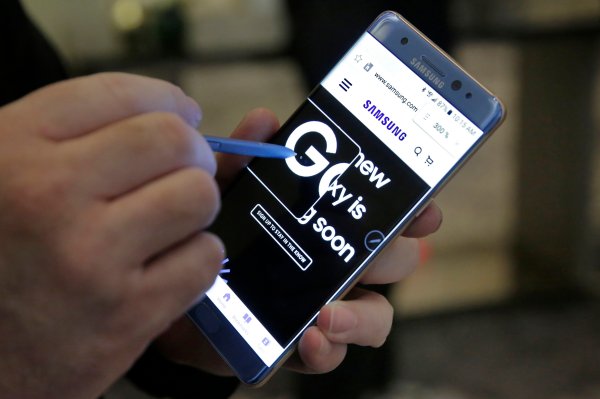 3 Phones to Buy if You Love Samsung's Galaxy Note 7
Next Up: Editor's Pick