Thailand’s King Bhumibol Adulyadej died at Bangkok’s Siriraj Hospital Thursday, the palace has announced. He was 88.

His reign lasted 70 years, making him the world’s longest-serving monarch. During that time he was seen as a unifying force in the country, and truly revered by the people of Thailand.

The palace announced that the King died “peacefully” at 3:53 pm local time. “Even though the board of doctors has closely monitored and treated him to the best of its abilities, the king’s condition never improved but deteriorated until Thursday,” the palace said.

Junta leader Prayuth Chan-ocha announced that Crown Prince Maha Vajiralongkorn will be the new monarch in accordance with the constitution, Associated Press reports. Government officials will observe a one-year mourning period, he said, adding that all government events would be canceled for one month.

“He was a king that was loved and adored by all. The reign of the king has ended and his kindness cannot be found anywhere else,” Prayuth said.

Outside the hospital somber crowds trickled through the gates with tears wet on their cheeks. Some milled around as if waiting for something else to happen.

“I am very sad. I wanted the King to stay longer,” 64-year-old Wassana Phew Kham, tells TIME as she blinks back tears. “Since I was born, my parents always had a picture of the King in our house. I have prayed to him every day.”

Shortly before the palace’s announcement on Wednesday, senior members of the royal family, including the Crown Prince Vajiralongkorn and Princess Sirindhor reportedly visited the hospital. Prayuth also flew back to the Thai capital Wednesday, cutting short an official appointment in the neighboring province of Chonburi for an audience with the Crown Prince.

“I heard there were many rumors on social media so I came here to find out the truth,” says 24-year-old teacher Prae. “I am speechless. I cannot describe how I feel now.”

As mourners left the hospital grounds, the surrounding sidewalks became full with the grief-stricken. But the mood was calmer than it had been over the past week, when the nation had waited on tenterhooks for news of the King.

As Bhumibol’s health had declined in recent years, the subject of succession has become increasingly sensitive. His only living son, Vajiralongkorn, is poised to assume the throne, but the country’s broadly applied lèse majesté law (which prevents anyone from defaming or insulting members of the royal family) means that discussion of the monarch’s health and the line of succession is heavily curtailed.

In the days leading up to his death, Thais gathered at temples and held vigil outside the hospital offering wishes of good health. Many had donned pink shirts to express their hopes of health for the King. The color first became associated with the King a few years ago when an astrologer said it would promote his well-being. In recent days, messages have been shared on social media urging Thais to wear pink.

The King has spent much of the past year at Bangkok’s Siriraj Hospital. Since 2009, he had been in and out of hospital for a variety of ailments, most recently for a chest infection and hydrocephalus (or water on the brain.) 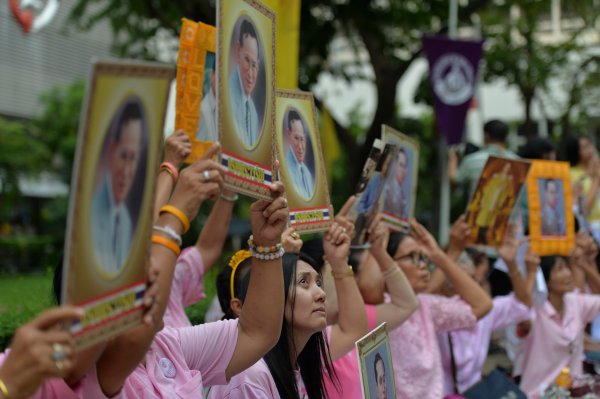 Thailand: Vigils Continue for Ailing King
Next Up: Editor's Pick