ISIS May Have Used a Drone to Kill Troops in Iraq, Report Claims

ISIS may have used a commercial drone rigged with explosives to kill two Kurdish Peshmerga soldiers and wound two French soldiers in Iraq.

According to an unconfirmed report in French newspaper Le Monde, the attack occurred on Oct. 2. It is unclear whether the device was detonated by a remote control or a timer.

The drone was reportedly intercepted and destroyed before it landed.

Neither France’s defense ministry nor Iraqi military officials have verified the report, which has been widely cited in other media.

According to the New York Times, the Islamic State is known to use commercial drones for surveillance purposes and in the last month the terrorist group has tried to use small drones at least twice to launch attacks.

American commanders in Iraq have issued warnings to consider any small flying aircraft as a potential explosive device.

“We should have been ready for this, and we weren’t,” P.W. Singer, a robotic weaponry specialist at Washington think-tank New America, told the Times.

The wounded French soldiers have been repatriated to France for treatment. 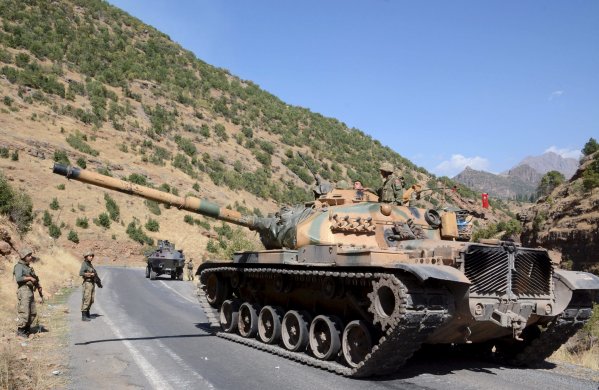 Iraq Warns Turkey of 'Regional War'
Next Up: Editor's Pick