Most voters are unhappy with the current state of the country and disappointed with their choices this November, but on key issues they narrowly favor Hillary Clinton, according to a TIME/SurveyMonkey poll.

In an online tracking poll of 5,478 registered voters taken Sept. 28-29 after the first presidential debate, nearly three-fourths felt the country was either stagnating or falling behind, while roughly a fourth thought it was making progress.

When asked to choose which emotions described how they feel about the election, nearly half chose disappointed or scared, while only nine percent said they were satisfied.

Read More: Women Are More Scared About the Election Than Men

But if those results indicated an opening for Republican nominee Donald Trump in the presidential election, other responses showed he has not capitalized on it, especially on his key criticisms of Clinton’s approach to ethics, immigration and terrorism.

• When asked who they trust more when it comes to ethics in government, 37 percent chose Clinton and 32 percent chose Trump, with 29 percent saying neither.

• On immigration policy, 42 percent said they would trust Clinton more, while 39 percent chose Trump and 17 percent said neither.

• The two candidates were essentially tied on who they would trust to handle the Islamic State and international terrorism, with 40 percent choosing Clinton and 38 percent choosing Trump, and 20 percent saying neither.

When asked to decide between two views of U.S. involvement in the global economy, 54 percent agreed with the statement that it’s a good thing “because it provides the U.S. with new markets and opportunities for growth,” while just 43 percent said it’s a bad thing “because it lowers wages and costs jobs in the U.S.” 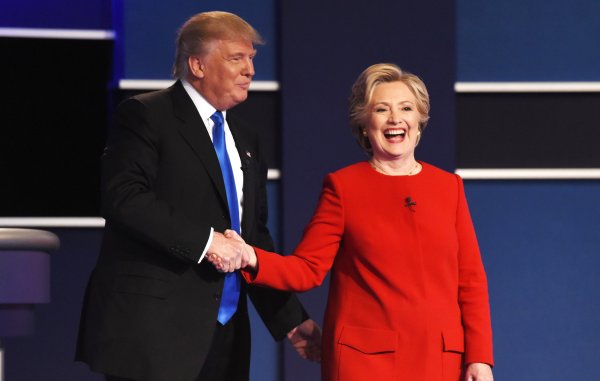 Poll: Women Are More Scared About the Election
Next Up: Editor's Pick