Thais Are Praying for the Recovery of Ailing King Bhumibol Adulyadej

As the sun rose over a peaceful Bangkok early Wednesday morning, two women knelt solemnly at an old Buddhist temple as a pair of barefoot monks dressed in orange robes accepted their alms.

Wat Yunnawa in the central Sathon district of the Thai capital is recognizable by its ship-like stupa, and is widely believed to be supported by the Crown Prince Vajiralongkorn. But the monks and citizens dotted around the compound were offering good wishes for the prince’s father, King Bhumibol Adulyadej, who lies in hospital after his already ailing health recently took a turn for the worse.

“I am really sad,” says Phra Poonchoke Chaungchum, one of the monks at the temple. “I would like to give him moral support and I hope that he recovers soon.”

The palace announced on Sunday that the world’s longest reigning monarch, who has been in hospital for most of the year, was in an “unstable condition” after receiving hemodialysis treatment, used to treat kidney failure. The treatment was meant to purify his blood, but it had made his blood pressure drop. There was no update from the palace on Tuesday regarding his condition, but doctors on Sunday said he was being closely monitored.

“I am very concerned, I feel uneasy about this news,” says Sumana, 68, one of the women kneeling at the temple, who bore a satchel bearing the Thai flag. “Every time I have the chance I pray for the King.”

On Monday, the army publicly announced on TV that it would arrange special ceremonies to be held at temples nationwide on the second Monday of every month until December, so citizens can pray for the King and royal family.

“As Thai people, we are very worried. I just hope the medical team can give the King the best treatment,” says Nippon Hareanput, 41 a motorbike taxi driver in Bangkok.

Bhumibol, 88, who has ruled Thailand for more than 70 years, is seen as a unifying force in the country and deeply beloved by this subjects. But his ailing health comes at a time of political upheaval in the kingdom. A controversial referendum in August effectively cemented the power of the military junta that seized power in a coup in 2014.

As the King’s health has declined in recent years, the subject of succession has become increasingly sensitive. His only living son, Crown Prince Vajiralongkorn, is poised to assume the throne, but the country’s broadly applied lèse majesté law (which prevents anyone from defaming or insulting members of the royal family) means that discussion of the monarch’s health and the line of succession is heavily curtailed.

Bhumibol is being treated on the 16th floor of Bangkok’s Siriraj Hospital. Below in the courtyard stands a statue of his late father, Mahidol Adulyadej, who helped to set up the public health system in Thailand, and was a patron of the medical facility. A handful of people kneel in front of the statue, some are wearing pink shirts, which means they are explicitly praying for the health and wealth of the King.

“This morning I woke up at 4:30 a.m. I prayed, took a shower and meditated for the King,” says a visibly emotional Pipat Inthasara, 43, who sells second-hand items at a flea market. “I rode my bicycle here and it took more than an hour. But I wanted to come to pay respect for the King. I can’t explain it in words, I’m speechless.” 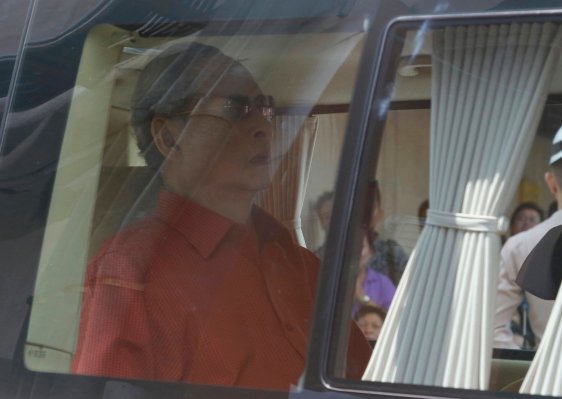 King of Thailand in Unstable Condition
Next Up: Editor's Pick