A costume company is facing intense backlash for selling a Halloween getup that shows Kim Kardashian West being gagged and bound as a “robbery victim.”

The “Parisian Heist Robbery Victim Costume Kit” is selling for nearly $70 on the website Costumeish and features a white robe, long black wig, black sunglasses, a fake gag, 2 feet of rope and a large ring.

“She has devoted her life to promoting American decadence, youth, and hedonism but all that flashy living caught up with her one night in Paris when armed men bound her, stole her jewelry and her peace of mind,” the website says in its description of the costume. “This Halloween, have some fun with pop culture and dress just like the Queen of Social media.”

The website does not name Kim Kardashian West due to legal issues, Costumeish founder and vice president Johnathon Weeks said. But the reality TV star dominated headlines last week when armed robbers held her up at gunpoint inside a private Paris residence and made off with more than $10 million worth of jewelry. The Keeping Up With the Kardashians star was tied up and locked in a bathroom. She was reportedly seen wearing a robe in a Snapchat taken before the robbery.

Dozens of people blasted the costume company on social media and in reviews on the website for making fun of the harrowing crime. “This is the most disgusting thing I’ve ever seen. How dare you make a mockery of a horrible thing,” one user wrote.

“I’m not a fan of Kim Kardashian but this is disgusting. This is not funny at all,” another person said. “The situation Kim was in shouldn’t be a joke to you or anybody. Just because she is famous doesn’t mean she is any less human.”

Weeks said the costume is meant to incite a strong reaction and that Halloween is a holiday that calls for some humor. “It’ll make people either cringe or laugh,” he told TIME on Tuesday. “I don’t want to make light of a serious situation. My deepest sympathy goes out to the family. No one really deserves to go through what she did. We’re not mocking her.”

The costume company has been behind a handful of outfits that have sparked outrage in the past, including last year’s “Bruce Gender” costume, which depicts a male and female version of Caitlyn Jenner, who was known as Bruce Jenner before she came out as a transgender woman, and a dentist holding a severed lion’s head in reference to the man who killed Cecil the lion. 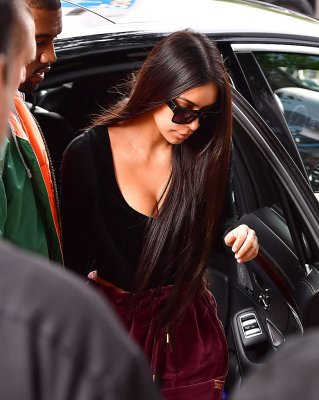 Khloe Kardashian: Kim Kardashian Is ‘Not Doing That Well’ After Paris Robbery
Next Up: Editor's Pick