Heather Hurlburt runs the New Models of Policy Change project at New America and has held foreign policy jobs in Congress, the White House and the Department of State

Donald Trump drew jeers from his opponents and cheers from his fans for his attempt to pivot from his hot mic sexual aggression to the fight against ISIS during Sunday night’s presidential debate.

It’s unlikely this was an accident. Polls show a significant minority of Americans —preponderantly, but not entirely, male and Republican—continue to view national security as an inherently masculine domain, one in which a female leader, qualified though she may be, is less desirable.

Over the past two years, analysts have urged us to ignore this remnant of attitudes of an earlier time. And they had some great-looking data on their side. After all, Hillary Clinton was consistently topping poll questions on “strength” and foreign policy. Terror attacks that pundits predicted would dent her numbers failed to do so. Some even argued that female candidates overall have leveled the playing field.

Four months ago, we at New America commissioned polling, as part of the Chicago Council on Global Affairs’ regular querying of the American public, and a dozen anonymous interviews of high-ranking national security officials on the question of how gender differences affect U.S. foreign policy. We hoped to build awareness and spark discussion of a set of research findings showing strong links between rates of gender-based violence and the likelihood of nations spiralling into extremism and conflict; and, conversely, of how much women’s involvement improves the prospects for peace agreements enduring to end such conflicts.

We never imagined releasing them into a media landscape dominated by discussions of genital-grabbing.

But what we heard over the weekend makes the connection all too clear. The culture of national security policymaking, our respondents told us, is still dominated by that minority who see the topic as inherently problematic for women—or, more commonly, who see women’s appropriate role as fitting into a man’s world as they find it.

All of the national security leaders interviewed by our partners at POLITICO Focus said they viewed women “as useful as men in conflict situations.” But when asked, specifically, what women were good for, no respondent named either of the two key aspects of conflict—making war or negotiating peace. Instead, respondents toggled between what they saw as the cultural realities of other societies—only women can talk to women—and a set of hackneyed stereotypes about women’s innate qualities: “Women can relate to shared experiences, like childbirth.” “Women have better balance.” “Women are better at affecting attitudes in villages and devising effective messaging.”

The majority of respondents, and particularly men, made it clear that they didn’t see gender as an important dimension in foreign policy, and that long-term a “win” on gender would mean actually removing it from consideration. Younger respondents and women, however, pointed to this view as the problem and specifically called it a “pervasive mindset of old, white men.”

Exactly what is that mindset? One senior policymaker told us: “In my 40-plus years in Washington, I’ve never felt there was a gender gap or inequality of people operating on policy matters.” Given the last half-century’s history—lawsuits over unequal pay and hiring at multiple government agencies, the slow movement of women into front-line and eventually combat roles within the military, the fact that women only reached one-third of Assistant Secretary and above level jobs in the last eight years—this is an astonishing statement.

Why does it matter? It seems that our next generation of national security leaders is not getting the message that women and women’s experiences of conflict are relevant to U.S. policy. And, too often, gender inclusion is merely for show. We heard over and over that gender rhetoric is for public consumption but not closed-door policymaking—a response with unsettling echoes of our unseemly political debate.

The none-too-subtle message in Trump’s comments Sunday—that someone who is man enough to brag in crude terms about sexual conquest is the best choice for military leadership—finds its echo in the way many of even those of us who find his words repulsive approach the vital task of safeguarding our country. The next president and her or his appointees have a rare opportunity to step past this model in a way that can make an enormous difference for our security.

We know what it will take to improve America’s disappointing performance in predicting, preventing and ending conflict, extremism and mass violence: more women involved. Peace processes are significantly more durable when women are at the table.

Appointees to prestigious and influential leadership positions should understand this. They must commit to looking at how different experiences fuel conflict or help end it. And surely, after this campaign season, it is not too much to expect that national security leaders will prioritize making full gender equality a reality. 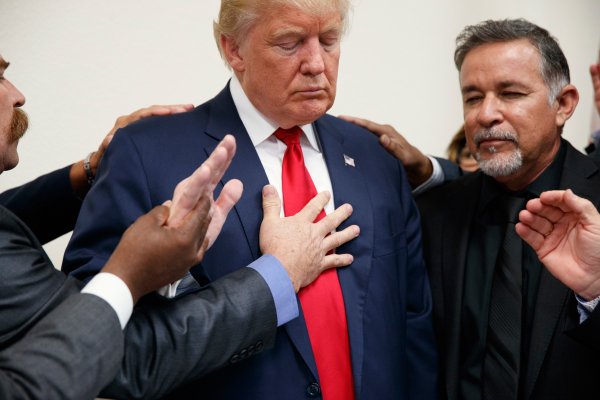 Donald Trump Is Not 'Authentic' Just Because He Says the Bad Things in His Head
Next Up: Editor's Pick