In the second presidential debate, Hillary Clinton continued to refer to Donald Trump as “Donald,” leveling the playing field on which she is routinely referred to by her first name. For his part, Trump abandoned the resolve that he announced at the start of the first debate to call his opponent “Secretary Clinton,” and even limited the number of times he called her Hillary. His preferred term of address in Sunday night’s debate was a bare, emphatic “she.” Rather than answering the questions he was asked, he often fell back on attacking his opponent, relentlessly repeating how “she” was responsible for everything wrong in the universe, including his own promulgation of the birther lie.

The answer was obvious: because Clinton did address the questions she was asked, and she didn’t talk over Trump when he had the floor. As in the first debate, interruptions went one way. Anderson Cooper chastised Trump: “Please allow her to respond; she didn’t interrupt you.” And when Trump grumbled, “She just went about 25 seconds over her time,” Raddatz corrected, “She did not.”

In addition to the demeaning hiss of “she” (and an occasional “her”, with a malevolent “you” thrown in from time to time), Trump lobbed variations of the word “lie” at Clinton, even as fact-checking websites exposed his own statements as untruths, while she accurately and decorously labeled what he said “not true” and “absolutely false.” She smiled; he scowled. She remained composed; he paced and prowled.

The primatologist Jane Goodall told The Atlantic’s James Fallows that “In many ways the performances of Donald Trump remind me of male chimpanzees and their dominance rituals. In order to impress rivals, males seeking to rise in the dominance hierarchy perform spectacular displays: stamping, slapping the ground, dragging branches, throwing rocks. The more vigorous and imaginative the display, the faster the individual is likely to rise in the hierarchy, and the longer he is likely to maintain that position.”

Trump’s behavior may be vigorous, but it is far from imaginative. And evidence shows that he is failing to maintain the dominance he seeks.

The specter hovering over the debate, much as Trump hovered over Clinton as she spoke, was the 2005 video in which he boasted that, thanks to his celebrity, he could get away with kissing and groping women, even grabbing their genitals (though he didn’t use that word). Trump tried to dismiss the incriminating video as “locker room talk,” but the behavior he described in it had already been reported. In the tape he said, “I’m automatically attracted to beautiful — I just start kissing them. It’s like a magnet. Just kiss. I don’t even wait.”

That’s precisely how Temple Taggart described to the New York Times the way he greeted her when she was Miss Utah in 1997: “He kissed me directly on the lips. I thought, ‘Oh my gosh. Gross.” And a Florida woman, Jill Harth, told the Times’ Nicholas Kristof that in 1992, when she and her boyfriend met with Trump to discuss a business partnership, he “ran his hands up her skirt, to her crotch.” The Times’ extensive reporting has provided ample evidence that, as Clinton put it last night, the tape “represents exactly who he is.”

There has also been ample evidence of who Clinton is: someone who bears no resemblance to the “devil”—yes, he used that word—that Trump depicted. The independent fact-checking website Politfact has found her to be the most truthful of all the 2016 presidential candidates (and Trump to be the most mendacious). And the former New York Times editor Jill Abramson wrote in The Guardian: “As an editor I’ve launched investigations into her business dealings, her fundraising, her foundation and her marriage. As a reporter my stories stretch back to Whitewater. I’m not a favorite in Hillaryland. That makes what I want to say next surprising. Hillary Clinton is fundamentally honest and trustworthy.”

If Clinton even slightly resembled the person described by Trump and Republicans, someone who knows her personally would have noticed. Instead, those who have known and worked with her—including Republican senators—have declared that the Clinton they know is warm, funny and dedicated—and has a rare ability to work with others and get things done.

That’s the real Hillary Clinton, just as the man revealed in the tape, in the accounts of those who experienced him firsthand and in Sunday night’s debate is the real Donald Trump. 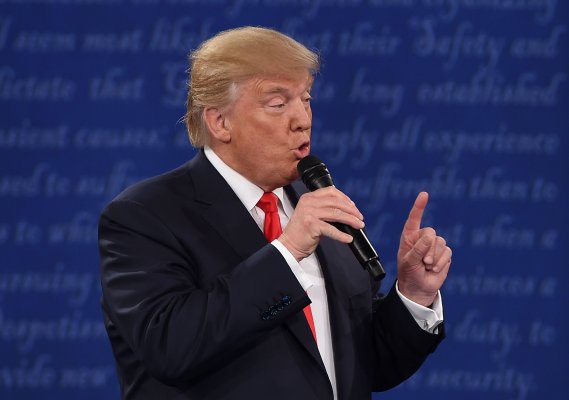