António Guterres Is the Right Choice for U.N. Secretary General. But the Process Is Flawed.

The next secretary-general of the United Nations, most everyone agreed, was supposed to be a woman. To be exact, a woman from Eastern Europe.

Now it is clear that it is going to be António Guterres, former prime minister of Portugal. Guterres is not from Eastern Europe. And he’s certainly not a woman.

Guterres is generally considered a good choice. The process by which he was chosen, less so.

Among those who, like me, have long studied the United Nations and how it makes its leadership choices, hopes had been raised that this time around things would be different. They were, but not nearly as different as they needed to be if the process is to be seen as globally representative.

The way we choose the world’s chief diplomat has always been badly flawed. Essentially, the five permanent members of the U.N. Security Council (China, France, Russia, the United Kingdom and the United States) find someone they can all live with. If even one says no to a candidate, the candidate is out.

They then tell the rest of the Security Council, and ultimately the 193 states represented in U.N. General Assembly, to live with that choice. Invariably, they do.

The result, most often, is a lowest-common-denominator choice. Someone who would not “rock the boat.” Someone who would not “spring surprises.” In the worst case, it gives you the super-pliant Kurt Waldheim (Austrian, 1986-1992) who elevated the role of the P5 even more. In the best case, you can get a Dag Hammarskjöld (Swedish, 1953-1961) who tried more than anyone else in that office to rise to the organization’s founding vision.

This time, as the search for Ban Ki-moon’s successor and the United Nation’s ninth secretary-general began, there were calls to make the process more transparent and more consultative with the rest of the member states. Cosmetically, it was. But, mostly, cosmetically.

Largely on the valiant insistence of U.N. General Assembly President Mogens Lykkeetoft from Denmark, an attempt was made to open up the process. For the first time ever, the candidates took part in public debates where they outlined their vision and priorities. These were globally televised. Informal dialogues with the U.N. General Assembly were held. A series of “straw polls” were taken in the Security Council, and results made public.

All of this was new, and starkly different from prior processes which had been held entirely behind closed doors, with nothing except carefully planted rumors leaking out.

At the end of it, however, it was the major powers who came out of the Security Council after their sixth straw poll to announce that they had a “clear favorite.” The choice had been, according to U.S. Ambassador to the U.N. Samantha Powers, “remarkably uncontentious, uncontroversial.”

There was no doubt in anyone’s mind whose choice it was.

And, by this time, the choice was also no surprise. Guterres had come out ahead in all six straw polls. None of the six female candidates had consistent, or even significant, support. Nor did any of the candidates from Eastern Europe.

At least one of the female candidates, Argentine Foreign Minister Susana Malcorra, was not fully confident of the process. Last month the journal Foreign Policy reported her as saying, “You don’t have a chance if you’re a woman … It’s not a glass ceiling. It’s a steel ceiling.”

The “steel ceiling” is not just for women. It is really for any candidate not backed by the P5.

The crucial sixth straw poll on Oct. 5, 2016, was the one where the P5 could use their veto votes. Every candidate except for Guterres was vetoed by one or more of the P5. Danilo Türk of Slovenia, who at one point had seemed like Guterres’ closest competition, was vetoed by as many as four of the permanent five. Four other candidates had three vetoes. Apparently, this was not a field of candidates that the P5 was very fond of.

In short, the P5 made certain that António Guterres was the only one left standing. However, it should be noted that even he got only four of the P5 voting affirmatively for him. A mystery fifth permanent member chose the “no opinion” card, effectively abstaining and letting him be crowned as the “clear favorite.”

The door, maybe, is not shut as tight as it once was. Light as well as sound can now peep through more than ever before. But at the end of the day, the process for selecting the secretary-general of the United Nations has remained the same.

The P5 decided. Then they told the rest of the Security Council they expected a formal vote by acclamation. On Oct. 6, they got that. Now, they expect a consensus vote from the U.N. General Assembly. Most likely, they will get that too.

On balance, the process of selecting the world’s diplomat-in-chief this time around became a little more public, and a lot more interesting. However, it is no less flawed than it ever was.

By all indications, however, the choice that has been made is a good one. Although the U.N. has never had a woman leading it during its 70 years of existence, and even though António Guterres, at 67, will become the second-oldest person to hold the office (Boutros Boutros-Ghali was 70 when he became U.N. Secretary-General), there is much to like about this choice.

Guterres will be the first person to hold the office who has served as the chief executive of his country. Experience and a political sensibility can add much heft to the office. As prime minister of Portugal (1995-2002), and much more as the United Nations high commissioner for refugees (2005-2015), he has demonstrated a resolve to tackle tough problems.

In the latter role, he was able to not only work with the major powers but to nudge – sometimes push – them to go where they might otherwise have not. This is a skill that should come in very handy in his new role.

Probably the last thing Guterres is thinking about right now is how the 10th secretary-general of the United Nations – his successor – will be selected. One hopes, however, that someone is thinking about that question and how it will be answered in five years, or 10. Hopefully, he would have helped open the process of selecting secretary-general even further – making it not just more public, but more representative. 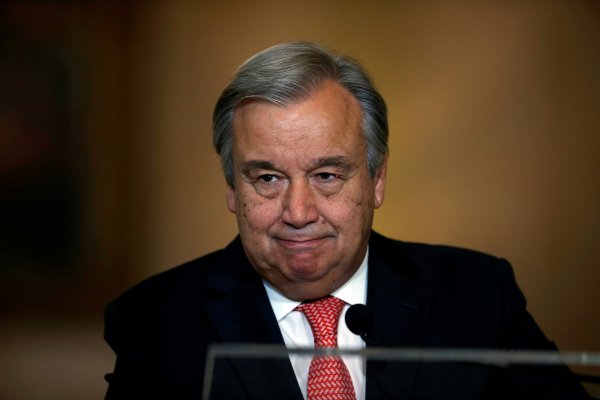