The audience at the second presidential debate again broke with the rules and tradition to laugh, cheer and applaud while the candidates spoke.

As at every general election debate, moderators Anderson Cooper and Martha Raddatz asked the live audience to remain quiet throughout the course of the event.

But the audience at Washington University in St. Louis broke that rule at least six times during the debate.

Right out of the gate, Trump was asked to defend a recently released audio recording of him boasting about having the leeway to grope women due to his celebrity status, which moderator Anderson Cooper noted sounds a lot like sexual assault.

His response led to the first applause line of the night—one that was quickly followed by an applause-worthy reply from Hillary Clinton. The Republican nominee directed attention to four women sitting in the front row of the debate hall, three of whom had accused former President Clinton of assault, and suggested Hillary should be “ashamed” of herself for her handling of those accusations.

“I will tell you that when Hillary brings up a point like that and she talks about words that I said eleven years ago, I think it’s disgraceful. And I think she should be ashamed of herself, if you want to know the truth,” he said to applause.

Clinton rose from her seat, and repeated a popular line by First Lady Michelle Obama that’s been used to define the Obama’s, and now Clinton’s strategy against Trump’s tough talk. Earning applause from the audience, she quoted Obama: “When they go low, you go high.”

That was only the first 20 minutes.

The crowd also jeered when Clinton suggested a slew of statements Trump made about the FBI investigation into her emails was false. They cheered when Trump interrupted Clinton to state the former Secretary of State would “be in jail” if he was “ in charge of the law in our country.” And they let out a hearty laugh when Trump deferred to Clinton on the first question from the audience. “No, I’m a gentleman. Hillary, go ahead,” Trump said.

Trump’s interruptions appeared to rouse the crowd the most, with jabs about Clinton having little in common with Abraham Lincoln garnering laughs from the crowd in response to a question about leaked transcripts from her high-paid speeches. “Honest Abe never lied,” he said to hoots and hollers. “That’s the good thing, that’s a big difference between Abraham Lincoln and you.”

But while the audience reaction showed that some lines from each candidate broke through, one response in particular showed that they weren’t enamored with either one. That was when Raddatz tried to get the two candidates to move on.

“Mr. Trump, Secretary Clinton, we want to get to the audience,” Raddatz said. “Thank you very much, both of you.” 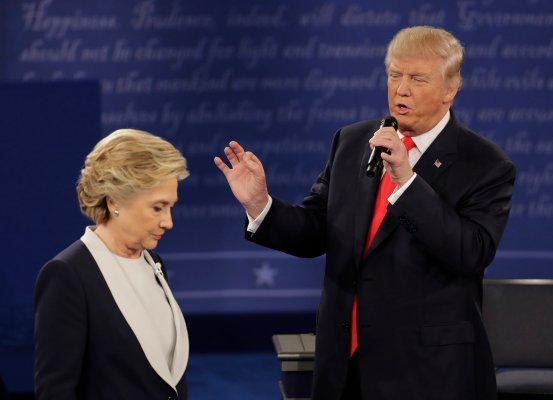 Read the Transcript of the Second Presidential Debate
Next Up: Editor's Pick